North ​A​yr​shire​ ​S​abres travelled to ​K​ilmarnock to take part in a x-ice with teams from ​K​ilmarnock, ​L​anarkshire,​ ​Murrayfield(red) and ​M​urrayfield(white).  ​T​he day seen some very good skills from all the players who have been listening to their coaches at training and are now taking their skills into games. ​ ​With Lanarkshire and ​Murrayfield(red) turning up short of ​players. Sabres​ Brad Ruxton & Lucas Allen volunteered to ice for Lanarkshire whilst David Turner, Leighton Murray and Bailey Toner volunteered to make up the numbers for ​M​urrayfield​, this was very mature of the boys and showed great spirit allowing the event to go ahead and all the kids play hockey.  ​All the kids had a great day​ and we are really happy with the way the team is progressing.

North Ayrshire Wild v Dundee Comets – Semi-Final Stuart Robertson Cup (1st Leg) at Auchenharvie Ice Rink, Stevenston.
Final Score: Wild 6 – 10 Comets.
Dundee Comets v North Ayrshire Wild – Semi-Final Stuart Robertson Cup (2nd Leg) at Dundee Ice Arena.
Wild travel​led​ to Dundee for the return leg of the cup being 4 goals down from the previous night.
The ​W​ild started really ​well​ with loads of shots on the Dundee net minder ​meaning that they finished the end of the ​1st ​period a goal up​ at 0-1. ​ ​T​he second period ​saw ​the ​W​ild ​continue ​where they left off in the first scoring more goals, this period ended 1-3 to the ​W​ild​.  Into the 3rd​ period,​ ​T​he ​W​ild need​ed​ another 3 goals to ​see them ​ ​i​nto the finals but ​sadly ​it wasn’t to be as Dundee equalised ​bringing it to ​3-3.  T​he ​W​ild needed to push forward but this​ then​ left them open and it wasn’t long before Dundee used this to their advantage and ​scored ​a further 2 goals ​which took​ this game out of the ​W​ild​’​s reach.
The ​W​ild played well​, ​ just need to start finishing the play with the puck in the net​ as​ several chances ​slightly missed the mark, hitting ​​the bar and post, but a lot was taken from this game as both coaches see massive improvement as a team and individuals.
​Final Score: Comets 5 – 3 Wild – Over all: Dundee Comets 15 – 9 North Ayrshire Wild. ​Mom Gary Parker 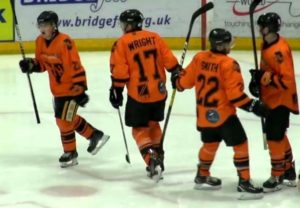 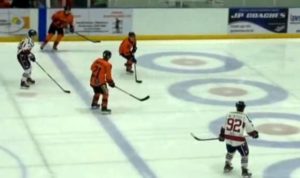 Photo’s by Ivor McBean.
​North Ayrshire Stars v Kirkcaldy Kestrels U14’s at Auchenharvie Ice Rink, Stevenston.
The Stars welcomed the Kestrels for their 1st meeting this season and we knew it would be a well fought match.  Stars opened the scoring with a great opening goals after only 2.40 on the clock from Flynn Massie after great team play saw a pass from Liam Houston to Emma Lamberton to Flynn.  Kestrels answered a minute later to level the game followed by another to finish the 1st period 2-1 up.
2nd period saw the Kestrels score 1st and Stars heads went down a little but not for long and soon got back on track with Liam moving the puck along the rink, passing to Flynn before Rocco Murray took a slapshot from just inside the blue line bring the Stars back into the game.  This was followed by an excellent blue line shot from Captain Kerr Drummond that whizzed by Kestrels Net Minder but the celebration was short lived as the goal wasn’t awarded as the Stars were unfortunately off-side.  Try as they might they just couldn’t get back into the game and Kestrels scored a further 2 goals.
Final Score: Stars 2 – 5 Kestrels. Goals from Flynn Massie and Rocco Murray. Man of the Match: Calum Simmonds Net-minder.​ 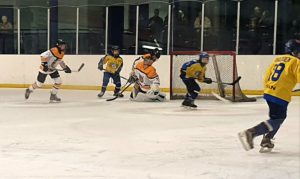 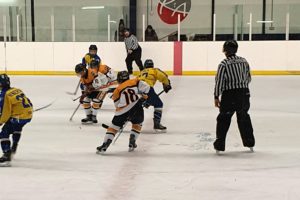 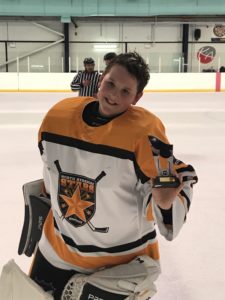 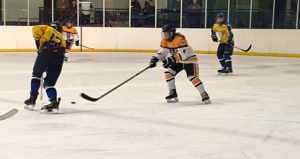