Traveled through to Murrayfield for a 12.15pm Face Off.

Stars found the net 1st, 17 seconds into the game, with a great goal from Dylan Murray, this was followed 4 mins later by another from Josh Carslaw and another from Dylan(unassisted) less than a minute later. Poor Murrayfield had been totally shaken up by this and seemed unable to stop the Stars advancing on them with their net minder even taking a puck of his helmet, before the 1st period ended with another volley of goals (3 in 59 seconds) from Cole McMurdie, Jack Neil & and unassisted goal from Flynn Massie saw the period finish 6 – 0 to the Stars

The 2nd period started the same as the last ended with Flynn again unassisted finding the net at 2.25 mins…this time Murrayfield fought back and managed to slip a goal over the top of our Net Minder Harry Campbell, another goal from Cole saw this period finish 8-1 to Stars.

A change to our goalie, saw Calum Simmonds between the  pipes for the rest of the match, our period started like the others with Dylan bagging his hat trick goal after 55 seconds, but this seemed to spur Murrayfield into digging deeper and this paid off with a late flurry of goals for them, although this wasn’t enough to win, shows the great spirit they had never giving up.  Our Stars are growing in ability and their game play & good passing throughout the game is paying off as working as a team is bringing them these results and the addition of some U12’s who stepped up yesterday just strengthens the team as they just like they belonged there.  Well Done to all the guys, sitting at 3 wins from 3 games.

Stars final score 9 – 4 to the Stars, Thanks to a hat trick from Dylan Murray, 2 goals each from Cole McMurdie & Flynn Massie & goals from Josh Carslaw & Jack Neil. Man of the Match – Adam Bainbridge. 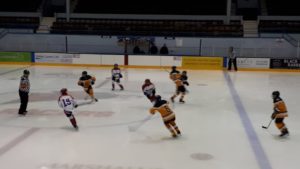 Traveled through to Murrayfield for a 4.45pm Face Off.

1st period  got off to a flying start with Murrayfield finding the net after just 2 minutes, this was answered less than a minute later with a Predators goal from Josh Carslaw (unassisted), with play being taken from net to net this was to be a close match with both teams fighting for that win.

The 2nd period saw the Predators find the net after 3 mins thanks to Cameron Murray, assisted by Aedan Orr , this was followed by his 2nd goal of the game from Josh Carslaw, assisted by Cole McMurdie.  With Murrayfield unable to find any way through the Predators disciplined play period ended 3-1 Predators.

The 3rd period saw Murrayfield come out fighting and net 2 goals to bring them level with both teams changing net minders, it was all to play for and it looked like no side could break though, but a lucky goals  5 seconds from time clinched it for ….. Murrayfield.  This team fought hard right up to that final buzzer, unfortunately the bounces were just not going their way and again the U14’s who stepped up to U16’s proved that they deserve to be there, working hard & unselfishly alongside their teammates.

North Ayrshire Wild continued their fine early season form with another big win in the Stuart Robertson Cup over local rivals Kilmarnock Thunder.  This despite being missing some key player sat both forward and defence, which allowed some of the clubs U20’s players to step up and fill in, and they did so without looking out of place at all.
Taking the 5-1 1st period lead meant that the Wild were in control of the game from very early on and were able to dictate the play throughout with some fine passing and finishing.
Goals came from throughout the team, with Alan Maitland topping the scoring chart with 6 goals, proving himself to be too much of a handful for the thunder defence to handle.  He was closely followed by Ryan Parkin who put up 4 goals and 3 assists for a dominating performance.
All in, a great performance for the Wild, although some defensive lapses later onin the game allowed Kilmarnock on to the score sheet more than they should have.
Final Score 18 – 7  to The Wild – MOM – Scott Blackwell.”

Sunday say 43 players and their parents take part in a team building day laid on by the club at Tartan Warrior up in ……. Everyone had a great time, the sun was shining, ground was dry but of course they managed to find and wallow in the only wet area after completing the course.  Lots of happy, if mucky and tired players by the end of the day. Thank you to our fundraiser Cheryl Lamberton for arranging this……When can we book for next year?? 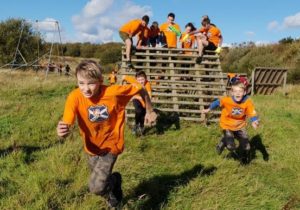 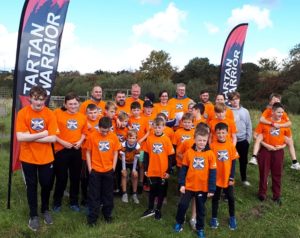 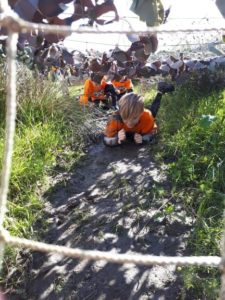 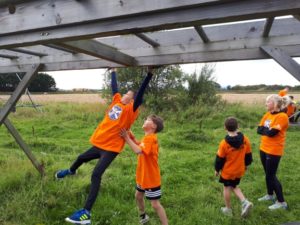 Our Learn To Play/U10’s are heading to Fife Ice Arena to take part in their 1st game of the season.

Saturday night sees The Wild welcome Kilmarnock Thunder to Auchenharvie Ice rink for the return leg of this weekends game.