A midweek home game for the Stars for this, their penultimate game of the season.

Ayr Bruins are playing tonight with our North Ayrshire Penguins goalie Calum Simmonds in their nets.  Calum has been helping them out after they found themselves without a goalie halfway through the season.

The Stars have a strong start and 3.20 min in, it’s 1-0 to the stars when Travis Baillie gets the first goal scored assisted from Flynn Massie.  Ayr are looking a stronger side than we have seen before and the first period is a close contest with them scoring 2 mins before the end of period.  The first period ends 1-1.

It’s in the second period that the game comes to life, with 3 more goals coming from the Stars giving Bruins an upwards struggle, with this period ending 4-1.

The last period, the Stars determined to leave their mark, dominating much of the play with another 7 goals coming from 6 different players , some of these being 2nd yr Penguins due to move up after the summer. Stars goalie Harry Campbell pulled out some good saves to deny Ayr any further goals.

The first leg was at home to North Ayrshire Wild and was looking to be a good game with the Wild taking to the scoreboard first with the only goal of the 1st period.  Into the second period and it’s the Wild score again making it 2 -0 but Racers fire back in quick succession and score 3 goals with this period ending 2-3 to Racers.

The 3rd period saw the Wild take silly penalties and with leaving only 4 men on the ice, Racers upped their game and played strong to score a further 3 goals ending the first leg North Ayrshire Wild 2 – 6.Murrayfield Racers. Man of the Match: Martin Cardno.  Get Well Wishes are sent to our Wild player Gary Parker who sustained a broken leg during the match.

The 2nd leg was played in Edinburgh at Murrayfield Ice Rink and The Wild needed a 3 goal score to draw even with their hosts, but it wasn’t to be there night as Racers came out strong with their big players & hit them hard in all 3 periods.  Wild again were taking too many penalties, making it hard to compete when down to 4 skaters, giving away the advantage which Racers took full advantage off. The final score on Sunday was Murrayfield Racers 11-3 North Ayrshire Wild. Man of the Match: Calum Siebenaler (C). 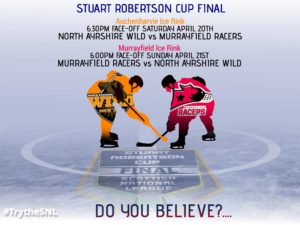