Home » Stars return as runner’s up from Sheffield U13’s Tournament.

Stars return as runner’s up from Sheffield U13’s Tournament.

Our Stars had a fantastic weekend at their last tournament of the season in Sheffield.

They got off to a flying start beating Swindon and showing that they were there to win.

The only Scottish team to take part in this years U13’s tournament then went onto to draw against Chelmsford, brfore returning to their winning form beating the home team and Manchester, making them the only team unbeaten at the end of day 1.

Day 2 started in fantastic fashion with an early win against Basingstoke and then Cardiff, putting them straight into the final.

Each and every player skated out of their socks, never giving up and making Swindon work for it, providing a very exciting game that went from one side of rink to the other over & over until Swindon managed to bag 2 goals giving them the win.

Our lads were gutted and rightly so, they really were fantastic and so deserved to win, but coming runners up in Group A in a competition where they were only upgraded from group B the week before after their fantastic performance of winning the Sam Wallace Tournament, they have the right to hold their heads high! 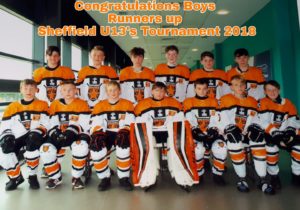