Naihc Stars welcomed their neighbours from Kilmarnock hoping to extend their winning run.

The Stars started brightly but it was the visitors that took the lead, this was to be short lived when our captain Rocco Murray scored to tie the game at 1-1. Stars came out the blocks at the start of the second period and took the lead inside 10 seconds through Lennon Deeney. Stars extended their lead with Rocco making it 3-1. Stars ended the second period on top with Liam Durning making it 4-1 with a great short handed goal.

The 3rd period started with Kilmarnock having most of the puck and Stars had to thank netminder Caiden MacColl who produced some excellent saves. Some scrappy action in front of the Kilmarnock goal saw the puck fall to Ashton Lomas who showed great skill and composure to slot the puck past the goalie to make it 5-1. This sparked a mini fightback from Kilmarnock who scored two quick goals to reduce the deficit to 5-3. Stars responded with 3 goals in the last few minutes all from Captain Rocco. Meaning the Stars continued their winning run winning 8-3. Well done to Ethan Rankin who made his Stars debut & MOM Netminder Caiden Macoll. 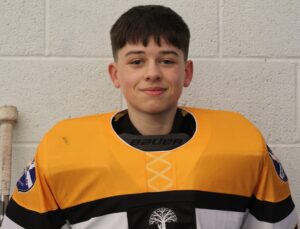 The Predators were hoping to replicate their winning form from their away game with local rivals Kilmarnock JIHC 2 weeks ago when they won 6 – 5 but it was Killie who scored after 3 minutes while on a power play with Predators saving a Penalty for having too many men on the ice.  Kilmarnock then were served a penalty but Predators were unable to take advantage until D-man Kerr Drummond moved the puck into position for his legendary slapshot (boy you do not want to be in the way of the puck) to level the score giving The Predators the equaliser at the end of the first.

Captain Flynn Massie scored a minute into the 2nd period after a great pass from Drummond giving the Predators the advantage, but Killie fought back and scored 3 minutes later.  After a few penalties on either side the score remained 2-2 at the end of the second.

The third period started in the Predators favour are some great passing from Massie to Jacob Woods who between them deeked the goalie to put them ahead.  In a frantic third period, it was the Predators who kept the calm with a solid defence while their forwards continued to place the Killie Goalie under pressure and each line made gains with strategic passing.  The game play from North Ayr stepped up and resulted in another goal from Massie for the team to seal the win 4 – 2. Special mention to the Stars who after playing their own game, came back on to play with the Predators and helped boost the team. 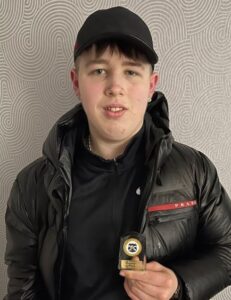 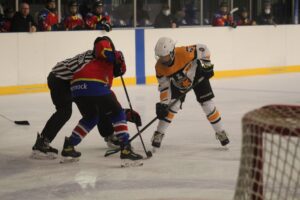