Home » Scottish Cup Semi-Final Success for 2 of our teams.

Scottish Cup Semi-Final Success for 2 of our teams.

North Ayrshire Devils v Ayr Bruins – Scottish Cup Semi-Final at Auchenharvie Ice Rink, Stevenston.  North Ayrshire Devils continued their quest for silverware with a home tie against local rivals Ayr Bruins in the Scottish cup. Devils were out to continue their winning start to the season, and it wasn’t long till their quality in attack brought the first goal.  Jamie Miller opened the scoring assisted by Christopher Burwood. Christopher Burwood added a second almost immediately. Ayr did manage to pull one back after the Devils lost position in the neutral zone. It wouldn’t belong till the Devils restored their lead via Jamie Wilson scoring his first goal at u20s level. This set the tone for the first period as the Devils stormed into a 7-goal lead at the end of the first period.

The Second period saw the Devils continue to rack up the goals without any replies from Ayr. With goals from Jamie Miller, Christopher Burwood and Lucas Corriea, gave the Devils a 12- goal lead going into the third period.

This period would see the Devils continue their dominance from the drop of the first puck. The Devils scored two quick goals which were quickly replied by the visitors. However, the home side would see out the rest of the game comfortably. The Final of the Scottish Cup takes place 21st March 2020 in Dundee ice arena face off 4:00pm.  Final Score: North Ayrshire Devils 19 – 3 Ayr Bruins. Man of the Match: Elliot McLachlan.  Photo Credit: Stephen Carslaw, Report: Paul Miller 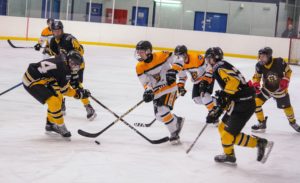 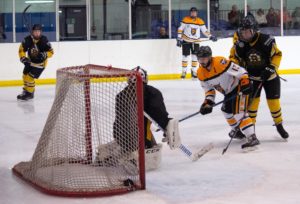 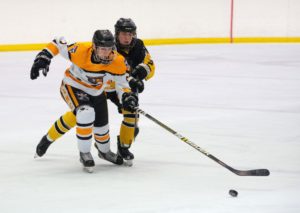 North Ayrshire Penguins (U12’s) v Murrayfield JIHC – Scottish Cup Semi-Final at Auchenharvie Ice Rink, Stevenston.  North ​A​yr ​P​enguins make the Scottish cup final for the second year running. Penguins welcomed ​M​urrayfield ​U12’s ​to ​​Auchenharvie ​Ice Rink ​for this Scottish cup semi-final match. Penguins started on the front foot and took the game to ​Murrayfield with Lennon Deeney, Max Stevenson and Rocco Murray all coming close to opening the scoring in the 1st period but ​it wasn’t to be​ and it ended 0-0. ​Thankfully ​it wasn​’​t to stay like that ​as​ ​Max opening the scoring for the ​Penguins only 30​ ​secs of the 2nd period gone. Penguins had net​ ​minder Caiden MacColl to thank when he made a great save to deny the visitors​ a goal​. Rocco then increased the Pe​nguins lead with a fantastic shot just after the 4th minute. Penguins then picked up a penalty giving ​Murrayfield an advantage and Caiden once again kept the visitors out with 3 fantastic saves. Liam Durning then had a 1 on 1 with the ​Murrayfield goalie but couldn’t take advantage. Murrayfield eventually found a way past the ​Penguins to score and make the score 2-1. With the seconds running out in the 2nd period Lennon fired the ​Penguins into a 3-1 lead. Murrayfield started the 3rd period fighting to stay in the ​C​up and had a shot hit the bar. Rocco then made the score 4-1 to the ​Penguins. Murrayfield didn​’​t let up and kept the pressure on the ​Penguins and eventually scored 2 goals making the score 4-3 ​with minutes left on the clock, making it a very nervous end to the game. Lennon was unlucky not to increase ​Penguins lead when he struck the bar and then the post. With ​Penguins getting hit with a penalty and a player sitting in the box with just over 2 mins left ​Murrayfield pulled their goalie making it a 6 on 4 in a final attempt to tie the game but some great defending from the ​Penguins saw them book their place in the Scottish Cup Final.​  ​Well done to all the players coaches and managers in this great achievement.  Final Score: North Ayrshire Penguins 4 – 3 Murrayfield JIHC. Man of the Match: Caiden MacColl.  Photo Credit: Fiona McBride, Report: David Turner. 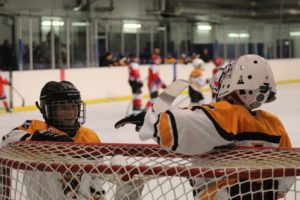 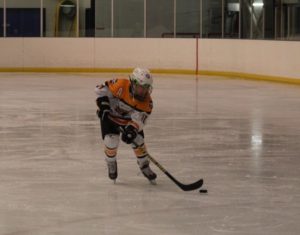 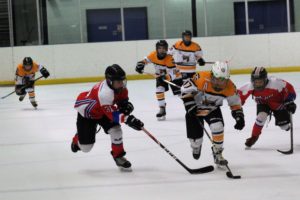 North Ayrshire Stars (U14’s) v Kirkcaldy Chiefs – Scottish Cup at Auchenharvie Ice Rink, Stevenston. I​t was a tough night at the office for the North Ayrshire Stars as they faced off against league leaders Kirkcaldy Chiefs in the second round of the Scottish Cup. ​​ The first shot on goal came from Stars ​player Adam Bainbridge​ within the first 2 minutes of the game, ​this was ​well saved by Chiefs net-minder​ Cameron Kenny​.  The ​Chiefs then went on to dominate the rest of the first period, which finished at 4-0 in favour of the away side. The Stars fought hard to keep the scoreline down, conceding 2 goals in each of the subsequent periods, finishing the game at 8-0 to the Chiefs who go on to face Solway Sharks in the Scottish Cup semi-finals.  Stars Player of the Match: Flynn Massie​ & ​Chiefs Player of the Match: Jo​e​ Lynch  Final Score: North Ayrshire Stars 0 – 8  Kirkcaldy Chiefs. Man of the Match: Flynn MassiePhoto Credit: Fiona McBride, Report: Lynsey McHugh 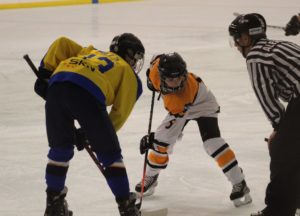 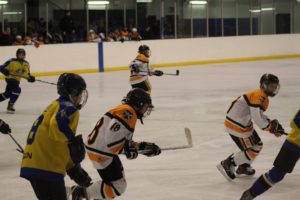 North Ayrshire Wild (SNL) v Dundee Tigers at Dundee IceArena.  The Wild faced a tricky trip to Dundee to take on the Tigers in the SNL.  Storm Dennis did it’s best to disrupt the game, as it eventually faced off 15 minutes late due to some of the team arriving late due to the weather conditions.

That said, the Wild started the better team in the first period and put Dundee under some early pressure with Mark Cardno unlucky not to score with the post saving the Tigers from going behind. Dundee then came more into the game with North Ayr lucky to go unpunished after attempting three or four cross ice passes that were easily cut by Dundee. A minor penalty for both teams still didn’t produce a goal as both power play lines failed to take their opportunities. With 18.12 on the clock Dundee got a lucky break in their defensive zone and Turnbull broke away down the left hand side to beat Scott Blackwell in the North Ayrshire Goal, and that’s how the first period finished.

Early in the second period, a poor line change by the Wild allowed Dundee to break down the ice and McIntosh fired it home. That appeared to make the Wild lose their momentum for a few minutes and the play became very scrappy. As the period went on the Wild seemed to settle back down and within a couple of minutes Fowley was denied by the post, and Andy Barr had a breakaway effort well saved by the Tigers net minder. North Ayr couldn’t seem to get any luck and found themselves four-nil down in a two minute spell in this period, due to another Dundee breakaway, and then an unfortunate attempted clearance by the Wild net minder going straight to a Dundee player who slotted it home.

The third period saw the Wild change up their lines a bit to try and cut the deficit, with the post again saving Dundee, who then broke down the left with McIntosh firing home. That was the end of the scoring with another couple of minor penalties taken by both teams.

A disappointing result for the Wild, who out shot their opponents but didn’t get any breaks or bounces of the puck going their way, whilst Dundee were clinical in their finishing and came out the winners.  Final Score: North Ayrshire Wild 0 – 5 Dundee Tigers.  Man of the Match: Scott Blackwell.  Photo Credit: Gordon Fowley, Report: Gerry Donohoe 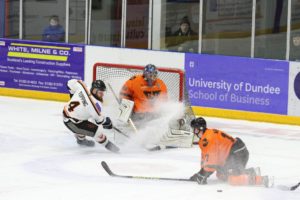 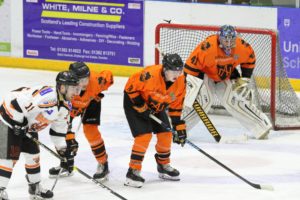 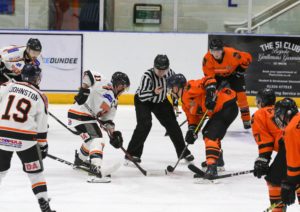 We now have 2 teams in the Scottish Cup Final being held in Dundee Ice Arena on Saturday 21st March. Well Done to our U12’s North Ayrshire Penguins & U20’s North Ayrshire Devils for winning their semi-finals this week. Our 16’s the Predators play their semi – final on March 7th. 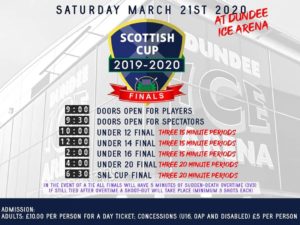 North Ayrshire Ice hockey Club are pleased to have 5 members of the club selected as part of the U11’s & U13’s Scotland Conference Squads taking part in JLMC Conference series mini tournament in Dumfries this weekend. Rocco Murray, Jake Reilly & Lennon Deeney will be in action on Saturday with the U11’s squad while Flynn Massie & Liam Houston are part of the U13’s squad playing on the Sunday.  Good Luck boys!!​ 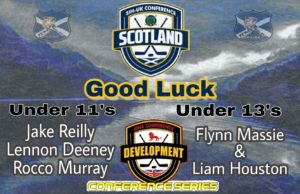 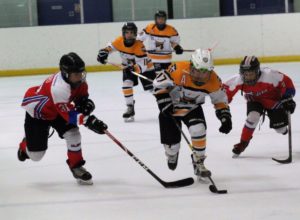