We were delighted with the progression that our Under 12’s have made this year, coming 2nd in the league table after winning all their games except the 2 against Kirkcaldy Redskins, they find themselves up against them again for the 3rd time this season in the final of the Scottish Cup.

Desperate to come away the winners this time, the Penguins were ready to work harder than ever and came out hard, pushing the play all around the ice, stopping the Redskins advances and creating their own, they held the Redskins at bay for the 1st period until they went a man down with 56 seconds on the clock and the Redskins used their extra player to score 30 seconds later bringing the period to a close 0-1 to Redskins.

The 2nd Period started just as fast as the 1st, but unfortunately Redskins bagged another 2 goals and this rattled the Penguins slightly but they soon gained their momentum and the fight to comeback was on.

Third period started with the Penguins  3 goals down and they fought hard and at times it looked like a comeback was on with Redskins net minder flying around his net, saving shot after shot from the Penguins but they just couldn’t get the breakthrough they so badly wanted.

The Penguins gave it everything they had the forwards driving it hard through the Redskins taking it to their net, the defenders shutting them down and providing the cover for their own goalie and passing the puck forward again to the 2 Penguin Net minders who were stopping any further goals from happening. It was a right team effort and a great game to watch.  everyone of the team played their part and should be proud of their efforts, but unfortunately, on the day, It wasn’t to be!

Final Score: North Ayrshire Penguins 0 – 3 Kirkcaldy Redskins.  Congratulations to the Redskins on an excellent season & a huge well done to every single Penguin for their fantastic season, their hard work, determination and pure effort! Thank you for a great year!

Man of the Match : Liam Houston 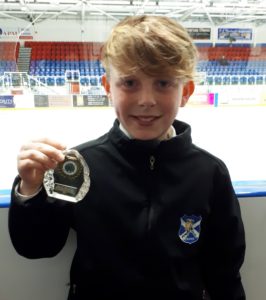 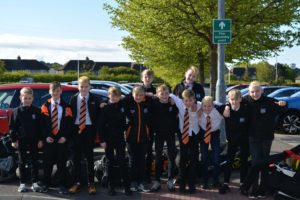 This was the Stars last game of the season and they have had a equally impressive season and find themselves joint 2nd with Kilmarnock going into this game.  With Dundee already having won the league and Kilmarnock playing them next week, 2nd place was at stake.

It was Dundee who took the lead 7 minutes into the game but North Ayr answered back with a Josh Carslaw Goal assisted from Dylan Murray & D-man & Captain Jack Neil just 10 seconds later.  This game was fast and physical with play moving around the rink with both sets of players desperate to make the breakthrough. 2nd period started at 1 goal a piece but it was Dundee who managed the breakthrough after 5 minutes and then again 5 minutes later but North Ayr did not give up and fought back and were rewarded with Flynn Massie slap shot goal from just inside the blue line with only 10 seconds left in that period to bring the scoring to 2 – 3.

The 3rd period started as furiously as the previous one had ended with some great teamwork and that determination to get the puck into the back of the Dundee net, North Ayr fell foul and found themselves a man down but this just made them fight harder and they were soon rewarded with the equalising goal from Dylan Murray assisted by Josh Carslaw.  Again North Ayr were short handed but again they showed their strength and pulled together as Dundee focused on North Ayr’s goal and their persistence paid off with a goal with 6 minutes left on the clock, but Dundee didn’t stop there and continued to rush the net where net minder Harry Campbell stood strong, while North Ayr’s defence stayed solid and denied any further goals while the forwards continued to push harder never leaving it to chance and challenged every move Dundee made.  All credit to North Ayr for never giving an inch and this stubbornness was rewarded when a wrist shot from Kerr Drummond was picked up by Josh Carslaw before it was Flynn Massie who guided it to the back of the net. This lovely teamwork brought the game to a close at 4 – 4. Next week’s Dundee Stars v Kilmarnock 14’s will decide if North Ayrshire Stars finish up 2nd or 3rd in the league. 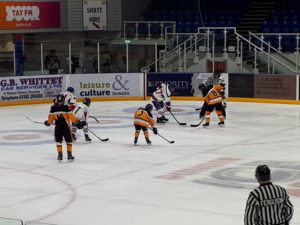 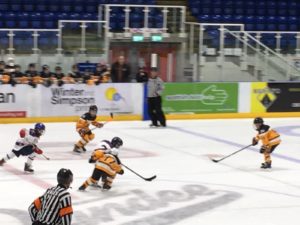 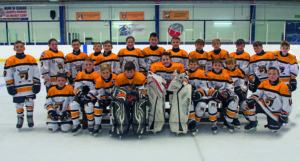