Well that’s our tournaments finished for this year and what a great couple of weekends we had.  The talent this year has blown us away, everyone brought their best and the games were thrilling & at times nerve racking!

We would like to thank all the teams who have travelled so far to join us.  Whitley Bay, Sheffield, Manchester, Murrayfield, Lanarkshire, Dundee, Belfast & Ayr all sent teams to compete this year making it our busiest to date!

After their round robin games were all played, we had our 6 semi-finalists:

Unfortunately the Under 11’s semi – final didn’t go our way, but if you have to lose, there is no shame in losing to the unbeaten English nationals champions Sheffield Thunder.  We knew this would be a tough game, but the Penguins gave it everything they had, fought & fought right till that final buzzer, showing grit & determination way beyond their years!  Final Score: Sheffield Thunder 8 – 0  North Ayr Penguins

Under 15’s were up next.  Pitted against the Belfast Junior Giants who finished top of the table & unbeaten, the Predators had their work cut out for them. From the 1st puck drop it was a fast paced game with the Predators pushing hard, not giving Belfast any room to break through while bearing down on their goals.  It was through this determination that they were rewarded with the only goal of the game, defeating the junior giants and grabbing a place in the final! Well played boys! Bring on the final! Final Score: North Ayr Penguins 1 – 0 Belfast Junior Giants.

Under 20’s were the last ones up.  This was another game that would prove to be a nail biter, with both North Ayr Devils and Whitley Bay Renegades out for the win.  With both teams scoring and time running out, they stepped up the pace but with 17 seconds left on the clock, it was the renegades who made it to the back of the net sending them into the final.  Final Score: North Ayr Devils 1 – 2 Whitley Bay Renegades.

Under 11’s –  Sheffield Thunder v Manchester Storm.  In this battle of the best from south of the border it was Sheffield Thunder who took the trophy, winning 4 -0 maintaining their unbeaten record.  Both teams gave it their best and were fantastic to watch.

Under 15’s – North Ayr Predators v Whitley Bay Tomahawks.  Predators were on fire from their semi-final win and fully charged up to make it all the way to the trophy.  We saw some excellent game play and brilliant team work that was a joy to watch, even if we were biting our nails until the Predators broke through and scored their 1st goal.  Tomahawks fought back hard and the play was even until another breakthrough was closely followed by a 3rd making the Predators the champions.  Final score: North Ayr Predators 3 – 0 Whitley Bay Tomahawks.

Under 9’s: Belfast Junior Giants v Murrayfield & Ayr Bruins v Whitley Bay Mischiefs
Under 13’s: Lanarkshire Lightning v Whitley Bay Mohawks & North Ayrshire Stars v Murrayfield
Under 18’s: Caledonia Globetrotters Belfast Bruins & Dundee Stars v North Ayrshire Devils
We had 2 teams make the semi-finals, Our Stars & Devils, but it just wasn’t to be this weekend for either of them despite the effort, determination and sweat our players put in, sometime you just can’t get the bounces no matter how hard you try.
The Stars came out fast and hard and were all over the Murrayfield defence but just couldn’t squeeze past Murrayfield Net-minder Ryan Hay, despite keeping up the pressure, it was Jack Adams for Murrayfield who sealed the fate of the Stars with 4 goals, & although the Stars staged a comeback with 2 sleek goals from the lovely teamwork, they were unable to get the win, having to settle for a very respectable 3rd place spot this time.
For the Devils, they faced a different kind of  torture.  After the full 25 min game, scores were tied at 2-2, so it went to penalty shots…..with the rink full and everyone hooked shot after shot made it passed both net-minders….with penalty shots at 6 a piece it was Dundee Stars net minder who saved a shot from the Devils and then the Stars made it to the back of the net, taking them onto the final.
The Finals
Under 9’s found our neighbours Ayr Bruins take on the Belfast Junior Giants.  Both teams were equally matched with Belfast winning their round robin game so the stakes were high and this certainly was a fine way to kick of the finals.  It was Ayr Bruins won clinched the win 5 – 3.
Under 11’s had Lanarkshire Lightning v Murrayfield. Both teams were after the win and Murrayfield were desperate to reverse the score from their last game.  It wasn’t to be and a very strong Lanarkshire team came out 3 – 1 winners.
Under 18’s had Dundee Stars take on our Caledonian Globetrotters team. The Globetrotters are a select team featuring players from North Ayr, Murrayfield, Fife, Solway, Dundee & Canada who have at one time played in Scotland teams for their age groups.  This game was every bit as close as the semi-final had been, but this time it was the Caledonian Globetrotters who won 2 – 1 come full time.
North Ayr were delighted to have numerous players nominated for All Stars which is a credit to the players and their coaches.  Here are the 5 lucky ones who made it through.
All Star Dream Team
U9’s:    Kyle Wedegren – Net-minder
U13’s;  Lennon Deeney – Forward
U18’s: Haydn Woods – Forward, Zak Kenneth – Forward & Jack Neil – Defence
(Jack was playing as part of the Caledonian Globetrotters as one of their younger members. This is Jack’s 2nd All Star over the 2 weekends)

So after a total of 414 goals over 75 games involving 29 teams, we bring our Sam Wallace Memorial Tournament to a close for 2019, but are already planning for #SWMT2020 and would love to see all these teams return to join us next year – Get in touch to reserve your space!

A huge well done to each and every player who came and brought what it takes to make this weekend amazing. You are a credit to your teams both on and off the ice and we would gladly welcome you back to next year’s tournament.

We need to say a big thank you to Tracey from Tesco Supermarket in Saltcoats who very generously donated fresh fruit and bottles of water for all our player to enjoy throughout the weekend.  The kids welcomed this and we are happy to report….nothing was left….not one single apple or banana. When our players are playing such high intensity game requiring short, sharp bursts of energy, fruit is much more needed to replenish them and water is a must.  It is wonderful to have the help and support from Tesco Saltcoats for the 2nd year running. It means so much to our club and all out players. Thank You Tesco! 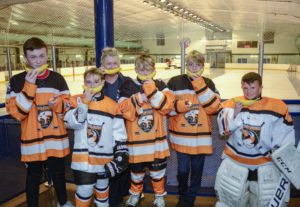 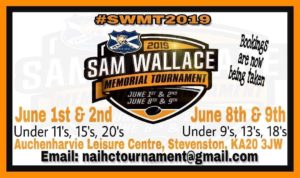