We have recently had a recruitment drive to encourage new players into our club, focusing on the 4yrs – 10yrs age group. This resulted in 12 new kids taking to the Ice on Saturday. We are delighted and excited to be working with these children and our fully qualified coaches are teaching them the basics of skating, giving them sticks to handle and letting them have fun while learning.
If you have a child who would like to come and try out Ice Hockey, email Pamela on naihcltp@gmail.com

Predators opened their season against an under strength Solway U16s icing most of their U14s team to make up the numbers. Whilst the Predators dominated the game from the first puck drop, the Solway players did a great job defensively and Robbie Gordon in the Solway net did a grand job keeping the home teams attack at bay. The breakthrough came just after 7 mins when Cameron Murray slotted home, assisted by debutant Kyle McIntosh and Josh Carslaw. Kyle and Josh then both scored to send us into the interval 3-0 up. The following 2 periods saw more of the same, some fine passing from the Predators, good positional play, and some very good power play work that resulted in another 5 goals to finish the game 8-0.
Shot count was 50-8 in favour of the Predators, which reflects the difference in experience between the 2 teams, but the Solway team kept the battle going to the end, despite the injury to goaltender Robbie Gordon and to player Gregor Mills. We wish them both a speedy recovery.  Man of Match for Predators: Fraser Maloney.

The WILD travelled to local rivals Kilmarnock Thunder on Saturday night to play their second game in the Stuart Robertson Cup . Having suffered a 9-1 loss against Murrayfield Racers in their first game the team were looking to get some points on the board.
The 1st period was tight with both teams taking a few minor penalties. Wild managed 24 shots on the Kilmarnock keeper but it took until the 19th minute of the period to get the opening goal, scored by Ryan Campbell assisted by Luke Kearsley.
The Wild were 2 up with 2 minutes gone of the 2nd period when Ryan Parkin scored a power play goal assisted by Callum Siebenaler. The Wild then had to redo their lines when Campbell got thrown out the game after 26 minutes.  Kilmarnock didn’t give up and pulled a power play goal back with 32 minutes on the clock. But the Wild were determined and with 33 minutes on the clock, it was their turn to score a power play goal with Callum Siebenaler finding the net assisted by Ryan Parkin. Kilmarnock fought hard & pulled it back to a 1 goal game with 4 minutes left of the 2nd period.  With only 2 minutes of the period remaining Wild got their 4th of goal of the game, Warren Crawford assisted by Lewis Davidson and Jamie Miller.  The 2nd period ended Thunder 2 – 4 Wild with the Wild out shooting Thunder by 27 shots to 4.
Wild upped the tempo at the start of the 3rd period and with only 35 seconds gone Martin Cardno scored a power play goal assisted by Callum Siebenaler followed quickly only 24 seconds later when Lewis Davidson scored assisted by Chris Underwood. A further 2 minutes later Andy Barr scored assisted by Chris Burwood and Luke Kearsley then it was the turn of Marc Fowley, who scored a lovely solo effort, still only 3 minutes into the 3rd period.  This prompted Thunder to change their keeper.  The new keeper had only been on ice for 1 minute before he was picking the puck out of the net after Lewis Davidson scored his 2nd of the match assisted by Chris Underwood. With the Wild on a roll and only 5 minutes of the 3rd period gone it was Ryan Parkin who scored next with his 2nd goal of the game assisted by Lewis Smith and Haydn Woods. 30 seconds later Kris Underwood fired one in from the blue line assisted by Luke Kearsley. Wild then scored another Power play goal when Jamie Miller redirected a shot by Luke Kearsley into the net followed minutes later when Callum Siebenaler scored his 2nd goal unassisted.  The final goal of the game came with 5 minutes left & was scored by Martin Cardno assisted by Callum Siebenaler and Haydn Woods.  The 3rd period ended with the Wild out shooting Thunder 29 shots to 8.
Final score Kilmarnock Thunder 2 – 14 North Ayrshire Wild  with the Wild Man of the Match: Their Captain Callum Siebenaler.  Reported by Ronnie Miller. 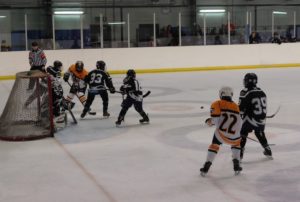