Predators win at Murrayfield while Penguins and Devils travel to Dundee

This week saw the Predators take on a mission…..there task….play as a team, shoot, pass and …bring home the win!

The team came out strong from the 1st puck drop and took the play right to the Murrayfield net but couldn’t get that 1st goal through then Murrayfield would pick up the puck and take it to the other end of the ice.  But call it luck or skill, Predators Dylan Murray scored 1st after little under 4 minutes but any hopes that this was to be an easy game were soon pushed aside when a minute later Murrayfield rush our net forcing our net minder Harry Campbell to pull off 2 great quick saves.  Play moved from end to end until Predators lost a player to the penalty box allowing Murrayfield the advantage, thus creating a goal. With more penalties being served on both sides, it was a tense time but Captain Kyle Forsyth, assisted by Dylan that put the Preds ahead with little under 5 mins of the period left. Predators taking a boost from this put a rush on the Murrayfield net but their goalie was ready and denied any further goals this period.

The 2nd Period saw the Predators come out strong and were rewarded with another goal from Dylan after only 24 seconds putting them 3-1 up, but a further penalty for Preds saw Murrayfield, again take full advantage of the extra man and score again making it 3-2.  With the game as tight, Murrayfield called a timeout to pep talk their players but thankfully it was our Predators who took the advantage with a goal from Josh Carslaw in the last minute of the period.

Starting the 3rd period 4-2 up, the Predators could coast along, but they didn’t but despite looking stronger it was Murrayfield who found the back of the net after 49 seconds.  Predators responded with Dylan bagging his hat trick goal. Murrayfield took another penalty giving us the advantage, this created the 2nd power play goal for the Preds with a lovely blue line shot from Jack Neil found its way through a field of players and over the shoulder of their nettie.  The game went back and forth with penalties and goals on both sides, but it was the Predators who had the upper hand, looking strong right to the end that pushed for that win, with further goals coming from Josh, Dylan & Jamie Wilson, made that happen. 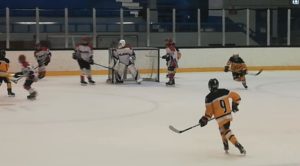 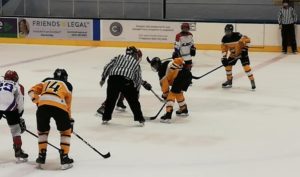 Game was postponed at the last minute when the Zamboni broke down, this was disappointing for both teams but will be rescheduled at a later date.

North Ayr Penguins travelled to Dundee looking to get revenge for the defeat inflicted by Dundee last week.

Both teams had a scrappy start to the game and when everything settled down it was Dundee who took the lead. Despite some Penguins pressure Dundee increased their lead with a short handed goal which somehow found it’s way past net-minder Caiden MacColl.  The 1st period finished 2-0 Dundee.

The second period started with Penguins on the front foot and Rocco Murray was unlucky when his shot came off the goalies glove and had her scrambling. Penguins kept up the pressure and Max Stevenson was next to be denied by the Dundee goalies pads.  This pressure woke Dundee up ant they pushed back but thankfully our goalie Caiden was alert when Dundee hit a shot and he saved with his helmet. North Ayr kept the pressure on looking for their 1st goal of the day but Ashton Lomas and Rocco were unlucky with their shots. Some great defensive work by North Ayr prevented Dundee increasing their lead. Ashton then had a great breakaway chance only to be denied again. Dundee then took a breakaway and looked certain to increase their lead but were denied by a great last ditch tackle by Lennon Deeney.  Caiden was then called upon when Dundee broke away but he easily denied them with a great save. With the 2nd period nearing the end Dundee increased their lead making it 3-0 .

11 seconds into the 3rd period and Caiden was under pressure once again. Rocco Murray took control and scored a great goal for the Penguins with a fantastic shot from the blue line. Max was unlucky with his great shot as North Ayr stepped up the pressure. Caiden then made a fantastic save in a 1 on 1 while Rocco advanced again but had his shot saved by the goalies pads. Penguins then swapped goalies with Caiden giving way to youngster Jake Reilly but despite not giving up the fight, were unlucky when a scramble in front of the Dundee goal just wouldn’t settle to allow a shot on goal. Dundee increased their lead to make the score 4-1.  This seemed to deflate the Penguins, Dundee then increased their lead while Jack Malcolm was unlucky with his shot that went just wide of the net. Dundee then scored their 6th with the seconds running down on the clock. The game ended 6-1 defeat for the Penguins.  Man of the Match: Ben Roxburgh. 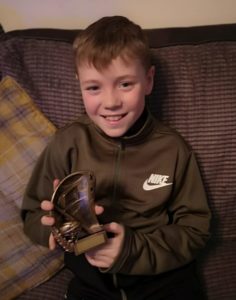 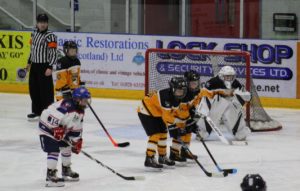 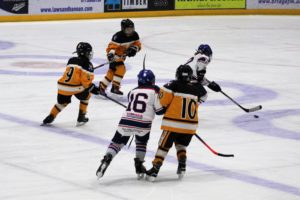