Home » Penguins return to winning ways while Wild are unlucky

Penguins return to winning ways while Wild are unlucky

Penguins started brightest and despite having a player in the penalty box Captain Rocco Murray lead by example and opened the scoring with a very taken goal after 1 minute 56 seconds. Next up was Lennon Deeney who had a fantastic effort saved by the Kilmarnock goalie keeping the score at 1-0. Jack Malcolm made it 2-0 when he forced home a rebound from his own shot after 3.48. Penguins kept the pressure on the Kilmarnock goal with shots from Liam Durning, McD and Jack but all were saved by the Kilmarnock goalie (on loan from Dundee Stars for the game). With the Penguins taking penalties it was Rocco who, with another short handed goal into the top corner made it 3-0 just after 7 minutes. Jack made it 4-0 just after 8 minutes, closely followed by Max Stevenson, who made it 5-0 after a great pass from Jack a minute later. Netminder Caiden MacColl had an easy 10 minutes in the Penguins net with the first Kilmarnock shot not coming till after 10 minutes but this was easily saved. Kilmarnock pulled a goal back in the 11th minute making it 5-1. Lennon was unlucky again this time with a slap​ ​shot from the halfway line as was Rocco, when his shot came crashing off the post. Penguins started the second period the way they finished the 1st and Lennon finally got his goal, making it 6-1 after 1.27 . 12 seconds later William Greenlees scored his 1st goal for the club making it 7-1. Kilmarnock didn’t give up and made it 7-2 with a well taken goal. Penguins had Caiden to thank when he made a fantastic double save. With both teams having a player in the penalty box, it was Rocco who increased the Penguins lead with a fantastic solo goal when he skated past the Kilmarnock team and slotted the puck high past the keeper. Paul Corrigan was unlucky not to increase the lead with a great effort.  Penguins changed goalies with Jake Reilly taking over from Caiden in the Penguins net. With Penguins on the penalty kill Kilmarnock took full advantage of the extra skater and pulled a goal back making it 8-3. Lennon restored Penguins 6 goal lead with a great slapshot after 10.38. Kilmarnock continued to fight back and pulled another goal back making it 9-4. With the seconds running down in the second period Rocco made the score 10-4. Penguins started the 3rd well and increased their lead with Lennon scoring after 44 seconds. Kilmarnock then scored 3 goals in 3 minutes reducing the deficit to 11-7. Rocco and Jack were unlucky with shots saved by their goalie. Kilmarnock were next to get a goal making it 11-8 after 7.51, but Max restored Penguins 4 goal lead after 8.12 while Ashton Lomas was unlucky with a shot from face off. Penguins showed some great defensive work when they were reduced to 3 skaters but Kilmarnock eventually broke them down and made the score 12-9. Lennon was unlucky with a shot before Max scored making it 13-9. With less than a minute to go, Penguins didn’t take their foot off the gas and Lennon scored to make it 14-9. Man of the Match: William Greenlees who scored his 1st goal for the team. 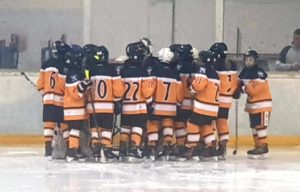 The first period saw both teams play some good hockey. Pirates went ahead first but this was short lived when the Wild slotted one past the Pirates net minder finishing the period 1-1.

Into the second period and the Wild forced the Pirates back into their defensive zone, repeatedly, so it wasn’t long before this paid off and the Wild slotted their second goal of the night, this period ends 1-2 to the Wild.

Into the 3rd and the Pirates seem to have woken and come out strong, finishing hit after hit, but the Wild stood their ground.  Eventually, the Wild ran out of steam and the Pirates racked up 4 goals leaving the score 5-2 to the Pirates. Was this a case of last night’s game telling on the team.