North Ayrshire Penguins made the short journey to Ayr Bruins for this Scottish Cup match. Having defeated Ayr twice this season, The Penguins were hoping to keep their winning run going. The match started with both teams coming close with some good chances but it was to be the Penguins who opened the scoring through Max Stevenson with 1.26 on the clock. Penguins kept up the pressure, forcing some good saves from the Bruins goalie but he was eventually beaten by a great shot from Lennon Deeney just after 6 minutes. Lennon then had a fantastic shot and with the Bruins keeper in no mans land his shot unfortunately hit the back of the bar.  Penguins had goalie Caiden MacColl to thank after some good saves that sent the Penguins into the next period with a 2-0 lead. The 2nd period started with Bruins on the front foot and they halved the deficit early in the second period making the score 2-1. The game was end to end before Penguins eventually restored their 2 goal advantage just after the 10th minute with a great shot from Rocco Murray making the score 3-1. Penguins didn’t let up and 20 seconds later Lennon Deeney made the score 4-1 with his hat-trick goal. That was to be the score at the end of the second. Penguins took their coaches advice and came out flying at the start of the third with Max Stevenson scoring after 37 seconds making the score 5-1.  Both teams had great chances before Lennon increased the Penguins lead just before the 6th minute making the score 6-1. Penguins kept the pressure up and scored 3 goals in the 7th minute through Rocco Murray, Liam Durning and Olly Turner making the score 9-1. Max increased Penguins lead just before the 11th minute with his hat-trick goal, making it 10-1 and just 6 seconds later Lennon scored to make the score 11-1. Rocco Murray made it 12-1 with his hat-trick goal just before the 12th minute. Bruins weren’t giving up and could have reduced the deficit if it wasn’t for some great saves from Penguins Net minder Jake Reilly. Penguins ran out comfortable 12-1 winners and progress into the Semi-final of the Scottish Cup.

Penguins return to league action on the 25th January when Dundee stars visit Auchenharvie Ice Rink, Stevenston with a 6pm face off.  This is a game between the only 2 unbeaten teams in the league, so will definitely be an exciting match, so let’s come along and give these talented U12’s kids all your support.

Could you do what they do? Come along and be amazed while cheering on our Penguins. 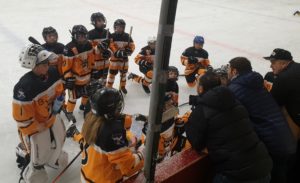 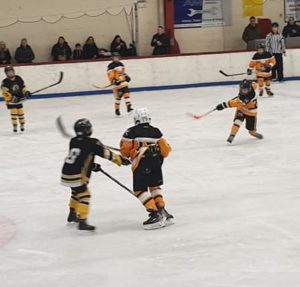 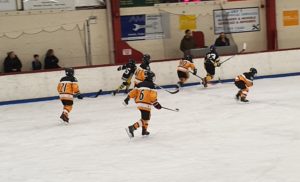 The Stars faced off against Kilmarnock under 14’s for the first time this season.  Both teams making an evenly matched start with play in both offensive zones within the first few minutes.  Several early penalties against Kilmarnock gave the Stars the Power play opportunities, however the Kilmarnock defence ensured they did not capitalise.   The teams moved to 4 on 4 when a Stars player took a 2 + 10 minutes for boarding, however team mate & Stars Alternate Captain, Flynn Massie #8, was able to sneak one past the Kilmarnock net-minder to get the score sheet started.  A further Stars penalty put the home side down to a 3 on 4 player disadvantage, which the penalty kill line did well to control. A shot on goal in the final minute from Flynn Massie #8 was well saved by the Kilmarnock net-minder, however Stars centre Emma Lamberton #9 was able to find the rebound & with a quick pass back to Flynn Massie, who made sure to send it home on the second attempt, ending the first period at 2-0 to the home side.

The 2nd period began with a flurry of activity in the Stars offensive zone, with ex-Kilmarnock player Rhys Deeley #3,  scoring within the first 30 seconds of the period, with a further classy assist coming from Emma Lamberton #9. This 3rd Stars goal was soon followed by a 4th as defence man & Stars Captain, Kerr Drummond #11, sent the puck flying to the back of the net with his signature slap shot from the blue line.  A Stars penalty, gave Kilmarnock a power play opportunity, however despite a spirited scramble in front of the Stars net, net-minder Calum Simmonds gave nothing away and the 2nd period ended 4-0 to the home team.

The 3rd period saw a change to Stars goal tending, with Caiden MacColl taking his spot between the pipes as Calum Simmonds sat with a clean sheet.  Caiden was tested early in the period, but showed his mettle with a strong glove save before making several saves during a further Kilmarnock power play.  Stars went 5 goals up on their opponents when defence man Aedan Monaghan #7 , took an unassisted skate from his own zone & finished by sending the puck into the net, top bins!  A final Stars goal saw Ewan O’Donnell #19 take his first goal of the season, and with less than 2 minutes on the clock, it looked sure to be a Stars victory. Kilmarnock were unwilling to go down without a fight however, and managed to pull 2 goals back within the last 90 seconds.  It proved too little too late, and the game finished at North Ayrshire Stars 6 – 2 Kilmarnock U14’s.  Player of the match for Kilmarnock under 14s: #4 Oliver Fraser.  Player of the match for North Ayrshire Stars: #19, Ewan O’Donnell.  Report by Lindsay McHugh. Photo Credits: Stephen Carslaw 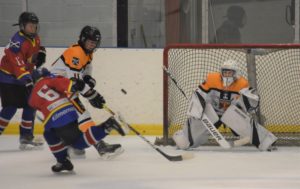 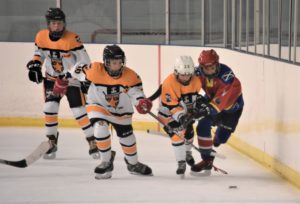 North Ayrshire Predators welcomed local rivals Kilmarnock U16’s to their rink with this being their 2nd meeting this season. With a draw last time, who would be the victor tonight?

Kilmarnock took the 1st penalty of the game giving the Predators a 5 0n 4 player advantage, but it was Kilmarnock who struck first scoring 2 quick short handed goals which seemed to rattle the Predators so when a 3rd short handed goal by Kilmarnock found its way past net minder Harry Campbell, things started to look grim.  Predators Defenseman Jack Neil make a skate for it, passing to Kyle McIntosh before Josh Carslaw slotted it home past Kilmarnock net minder, some great team work shown but Kilmarnock managed another goal late in the period meaning it finished 4 – 1 to our visitors.

The 2nd period proved to be a great comeback story for our Predators.  Just 1.39 seconds into the game and Josh assisted from forward Dylan Murray bagged his 2nd goal of the game, a welcomed boost that in turn inspired Jack Neil to follow with a goal 39 seconds later.  At 3 – 4 to Kilmarnock, Predators were firmly back into the game and 1.10 seconds later Josh scored his hat-trick goal again assisted from Dylan, with the game tied, the supporters on the edge of their seats and the North Ayrshire Drums creating a steady beat it was to be the Predators and Josh who scored the next goal. The atmosphere around the rink was a mixture of excitement and hopefulness at this comeback, but Kilmarnock decided to push back .. hard and scored 4 quick fire goals bring this period to an end at 8 – 5 to Kilmarnock

The third period saw both teams change net minders and Predators Calum Simmonds was soon tested but caught it with his glove only for it to be picked up by Kilmarnock and sent to the back of his net.  Predators replied straight away with a goal from Dylan Murray assisted by Jack Neil but Kilmarnock soon quashed any hope by netting another 5 goals.  Final Score: North Ayrshire Predators 6 – 14 Kilmarnock JIHC U16. Man of the Match: Josh Carslaw.  Photo Credits: Stephen Carslaw 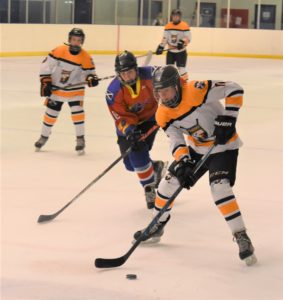 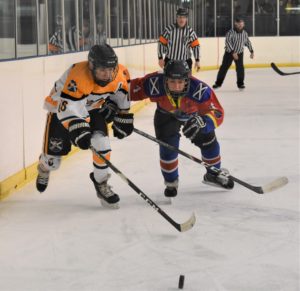 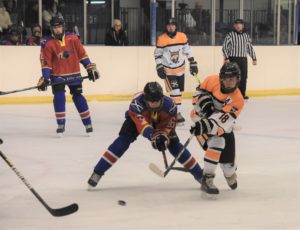 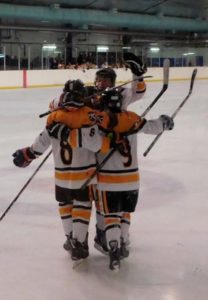