This was the 3rd away game in a row for the Stars and it was another early start as they headed down to Dumfries to take on Solway Sharks U14’s.

Determined to bag their 3rd away win they came out hard, pushing hard and were rewarded after 5 minutes when a lovely piece of teamwork saw Flynn Massie snake the puck up the ice before passing to Jacob Woods who found Emma Lamberton in front of the net and happy to score the 1st goal of the game for the Stars.  This was even more special today for Emma as she was playing for her grampa who passed away during the week. Solway came back hard and were rewarded with a goal. The play continued to move fast all across the ice with great saves coming from Calum Simmonds to finish the period 1-1.

The 2nd period started just as hard with the play going end to end with shots coming from Jake Larcombe, Kerr Drummond & Flynn Massie but these were all met by the Solway Netminder Logan Reid who was playing great between the pipes.  With both teams suffering penalties it was Solway who scored next bringing the 2nd period to a close, 2-1 to Solway Sharks.

The 3rd period started as the other 2 had with both teams fighting for the next goal and play was fast and furious with emotions high.  It was, on this occasion the Sharks who were to come away the winners after another 2 quick goals. 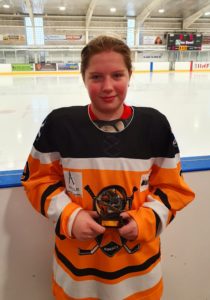 The sides met for the second time this season at Dumfries ice bowl, with an early morning start for the North Ayrshire team. Both teams started brightly but it was the visitors who took the lead via Dylan Murray, assisted by Josh Carslaw and Kerr Drummond. With further goals from Dylan Murray & Jamie Wilson (scoring on his debut 16’s game), the Predators finished the period 4-0 up.

The home side came out in the second period looking to reduce the deficit but to no avail, with goals from Jack Neil & Dylan Murray again with a double,  would see the Predators end the period with a 7-0 lead

This weeks game was at home against Solway Sharks and what a game it was.

The WILD matched Solway for most of the game. The first period saw the WILD take 12 shots on goal against Sharks 7 and this period ended 0-0 .

Into the 2nd and WILD could only manage 3 shots on goal but this was because of some good defensive Solway play, it was end to end stuff with John Russell pulling off save after save. Adam Kerr even stopped one from going in by putting himself in the goal mouth and took the shot to the body, Solway managed a short handed goal at 37.53 seconds, ending this period 0-1.

Into the 3rd and Scott Cowan changed the lines about with lines 1 and 2 going for it but energy soon got sapped when Solway scored another, shortly after they got a 3rd and so on, the WILD had run out of stamina, but this was a great game against probably this years league winners.