Friday night saw The Lauriston Hotel in Ardrossan host our Awards night for the Penguins (U12’s), Stars (U14’s), Predators(U16’s) & Devils (U20’s), followed by a buffet and then the opportunity to dance the rest of the night away.

We are extremely proud of all our players and realise the effort and hard work they have put in this season.  Our coaches and managers are a great asset and are constantly working hard with the players to improve their experiences and skills on and off the ice!  A big thank you to all our parents/carers and families, not only for supporting their players but for helping out on game nights, without them, these games couldn’t go ahead, without their commitment in getting their player to training and games we wouldn’t have the teams we have.  #Hockeyisfamily 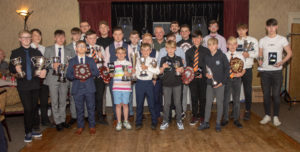 Penguins (Under 12’s), finished 2nd in the league this year and were the only one of our teams to compete in the Scottish Cup Final this season, coming runners up!  Well Done Penguins.

Predators (Under 16’s) finished 5th in the league. 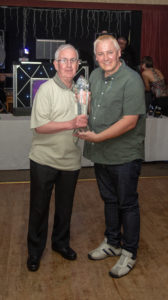 John Woods was a valued member of our club, vice-chairman and father of 3 players, who sadly passed away after a tragic accident.  His father Mr John Woods Senior donated the new trophy for the club to present to anyone whom they felt had made a valuable contribution within the club.  This year is was overwhelming agreed that Penguins Coach Mr Jamie Easton should receive it. Jamie has been active with our club for 13yrs from when his son joined as a 5yr old.  Jamie has had a hand in coaching most of our players throughout the years and gives up his time to attend weekly trainings & games as well as attending all training courses and of course our end of season tournaments.

John Woods Snr said as he presented his son’s award ‘I’m delighted the John Woods Memorial Award has went to someone like Jamie, he has played a part in coaching each of my grandsons, he’s a very deserving winner of an award that was to be given to someone who has made an outstanding contribution to the club’

Jamie said ‘I would like to thank John Woods Senior for the kind words on being awarded the John Woods Memorial Trophy, I was surprised and emotional on being awarded this Trophy having Coached Sean, Haydn and now his youngest grandson Jacob, John’s words were touching and appreciated, Congratulations to all the other Trophy winners. NAIHC has a bright future.’ 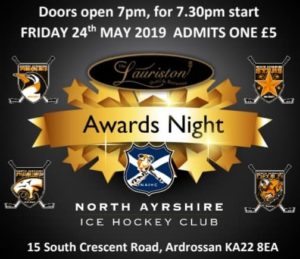