North Ayr Penguins were hoping to slay the giants from belfast for the second time this season and they have 3 of the squad on a high after receiving Scotland call upsto the U11’s squad.  But it was Belfast who opened the scoring after 10 seconds catching the Penguins team off guard scoring from face off. Penguins weren’t going to let giants have it their own way and equalised through Scotland forward Lennon Deeney.  Belfast showed they had skill in their own team and regained their lead making the score 2-1 to the visitors. Lennon again got Penguins back on level terms with a fantastic solo goal to tie the game at 2-2. With the end of the 1st period approaching it looked as if the teams would go in level until Penguins Captain and Scotland forward Rocco Murray scored to send the Penguins into the break with a 3-2 lead.

The second period saw Belfast start on the front foot again and could have scored early on if it wasn’t for a fantastic save from Caiden MacColl. This woke up the Penguins and Rocco soon made it 4-2 and another moments later made it 5-2 soon with his hat trick goal. Penguins increased their pressure on the giants goal and increased their lead when Lennon sent a rocket into the top corner with his 3rd goal of the game making the score 6-2. Belfast reduced the deficit near the end of the second with a well worked goal making the score 6-3. Jack Malcolm restored the penguins 4 goal lead with an excellent goal to make the score 7-3. This sparked a mini comeback from the giants who scored 2 quick goals making the score 7-5. Penguins then scored 2 quick goals of their own from Lennon increasing their lead to 9-5. The game then went end to end with Belfast being the next team to get on the score sheet reducing the deficit to 9-6. Rocco then increased Penguins lead by scoring another 2 goals making the score 11-6 before Belfast finished the scoring with a late goal making the final score 11-7 to North Ayr Penguins. Goals for Lennon Deeney x5 Rocco Murray x5 and Jack Malcolm. Man of the Match was Jack Malcolm.

The first period saw the home team take an early lead with a goal from captain Ryan Campbell assisted by Connor Park with only 3mins on the clock but Belfast answered back making it one all at 9.44. Each side desperate to find the net but denied. End of the first 1-1.  Belfast answered back early in the second with a power play goal. The home side would make it even again at 20.49 with a goal from Jamie Miller assisted by Kyle Forsyth. Devils then increased the lead with a third goal from Lucas Correia assisted by Jamie Miller and Ryan Campbell. The away side returned at 23.35 making it three each. Devils answered this with two quick goals from Kyle Forsyth assisted by Haydn Woods and Sean Woods. With the Devils on a power play, Darren Easton found the back of the net assisted by Ryan Campbell and Haydn Woods to finish the end of the second 5-4 Devils and this were looking great.  Third period however saw Belfast bag three quick goals to seal the fate of the devils. End of the game 5-6 Belfast. Man of the Match: Callum Ramsay.

Wild travel to Dumfries to take on the Solway Sharks. The Wild were short benched with car breakdowns and players not managing to get there, but the team wasn’t going to let that stop them. It was always going to be a tough night playing the team that will probably go on to win the league. Unfortunately The Wild went down with only 34 seconds on the clock then another 2 minutes later, the period ended 5-0. Into the second and the Wild upped their game and managed to score 2 goals but so did Solwayand then a couple more with this period ending 9-2. The final period was much the same with the Wild always playing second best, this game was played with the highest spirits and its great to watch a game of good ice hockey and very few penalties, Solway were a fast clinical team with crisp passes straight on to sticks between players, but the boys put up a fight and the game ended 14-4. Man of the Match: Scott Blackwell, Wild Net Minder.

North Ayrshire Ice Hockey Club are delighted to have had 9 players selected for Scotland Conference Squad this season.  This is testament to the hard work, self motivation and dedication to their sport from the players at club level and throughout the Scotland training camps so far.  Congratulations to: Under 11’s Squad:- Jake Reilly, Lennon Deeney & Rocco Murray. Under 13’s Squad:- Flynn Massie & Liam Houston. Under 15’s Squad:- Harry Campbell & Lewis McCrindle.  Under 17’s Squad:- Jamie Sturrock & Kyle Forsyth. 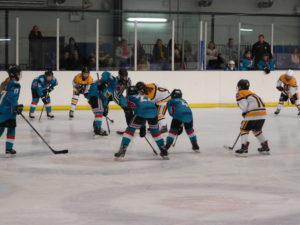