North Ayrshire Penguins v Lanarkshire Lightning at Time Capsule, Coatbridge.  Face Off: 10am
This was to be the 3rd meeting of these 2 very closely matched teams with Penguins winning previous games, they were keen to make it 3 from 3 and started very much on the attack but again Lightning were proving that they wouldn’t give up without a fight and took the play from end to end.  It was the Penguins who found the net 1st with Jacob Woods ending his recent drought on the goal front, this was then cancelled out when Lightning scored a minute later.  Jacob was on a mission and scored his second goal. This rallied the Penguins and with lightning finding themselves short handed struggled to stop a volley of shots from the Penguins that led to goals for our D-Men, Flynn Massie & Conor Wood.  Back to full strength, Lightning scored with a breakaway from Michael Duffy but this was not enough to put Penguins off their stride. With shots coming thick and fast it was Liam Houston who found a way through before Lightning scored just 12 seconds before the period ended making it 5 – 3 to Penguins.
2nd period started as the last one had finished with Flynn scoring his 2nd goal of the day, then it went a little wrong with Penguins finding themselves shorthanded and Flynn finding his shots on goal being saved over and over as the Lightning goalie was on fine form denying him 3  more goals.  With both teams back to full strength it was Lightning who scored the only other goal this period with both goalies pulling out some fine saves time and time again, much to both teams frustration.
3rd period continued much like the 1st period with tensions high and play covering the entire rink of the Time Capsule, it was Lennon Deeney who found a way through only for Lighting to answer that with another goal, with both teams falling foul and finding themselves shorthanded but the goalies playing blinders it made for such a great game that could have went anyway.  Aaron Stewart scored next from a rebound for the Penguins and this was followed up 3 minutes later with a great show, that taking chance when you see it from Flynn Massie, who had just returned to the ice as the Penguins has sent to puck towards Lightnings end of the rink, with the puck passing right in front of Flynn he took the opportunity to take it and make a perfect shot to clinch the last goal of the game. Both sides carried on pressing hard until time ran out.  Both these teams played a fantastic match, we have come to expect no less from them.
Final Score: North Ayrshire Penguins 9 – 5 Lanarkshire Lighting. Goals from 3x Flynn Massie 2x Jacob Woods, Conor Wood, Liam Houston, Lennon Deeney & Aaron Stewart.  Assists from 5x Flynn Massie, 2x Liam Houston & 1x Jacob Woods.  Man of the Match: Rocco Murray. 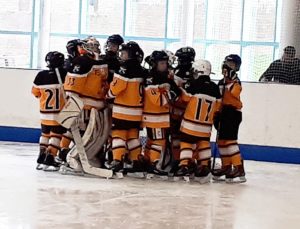 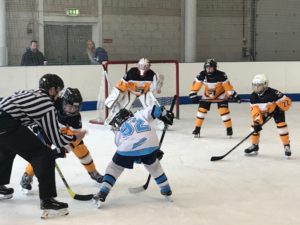 The Wild had it’s last game of the league against Murrayfield Racers. Into the first period with the Wild matching Racers until the 11th minute when the Racers open up Wild‘s defence to slot a goal past net minder Scott Blackwell, this period ended 2-0 racers.  Into the second and Wild are constantly being left open with a man left in the slot unmarked, period ends 7-0 to Racers. Both teams swapped there goalies and with Wild now upping their game they manage to get 6 goals back but not before racers get another 4.  The Wild were out classed in speed and style.

The Wild take on the Racers again in the STUART ROBERTSON cup final help over 2 nights during Easter Weekend.  Let’s hope they can put on a better show.   Home leg is Saturday 20th April, Auchenharvie Ice Rink, Stevenston with Face Off at 6.30pm, so come along to this and support your local SNL ice hockey team – North Ayrshire Wild.
Final Score: North Ayrshire Wild 6 – 11 Murrayfield Racers.  Man of The Match: Alan Maitland.