On Saturday the Sabres/Learn To Play team made the short journey to Kilmarnock to take place in a 4 team x-ice tournament with Kilmarnock, Ayr Bruins and Kirkcaldy for opposition, it was sure to provide a good test of the teams skills & skating during their 12 minute games.

The first round of games seen the team start quiet slowly and the team had to rely on the goal tenders Jake Reilly & Connie McDonald who both produced a number of good saves to help the team find their feet in the early moments of the games. Throughout the games it was great to see the experienced Sabres players lending their support to the younger players offering advice and helping them on the ice with their positional play.
Following a brief break the coaches team talk obviously seemed to get through as the second round of games seen the team step on the gas and start to score a number of good team goals passing and moving the puck faster across the ice with Ben Roxburgh, Liam Durning and Zack Docherty benefiting with a number of goals. Overall another good experience for the youngster who again displayed excellent team spirit and sportsmanship throughout the completion. 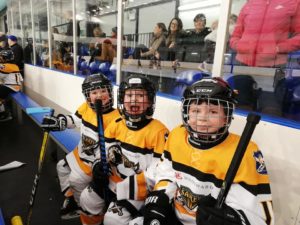 North Ayrshire Penguins v Kilmarnock Tornadoes (Under 12’s)
Auchenharvie Leisure Centre, Stevenston.  Face Off: 6pm
Keen to carry on from last weeks win in Kilmarnock, the Penguins were after a home win and came out fighting from the very 1st puck drop with the 1st goal coming after only 2 minutes from Flynn Massie.  This was followed up by multiple shots from the Penguins but they were being denied by the Kilmarnock net minder Max Cardoo, who was all over the net. It was another goal from Flynn Massie that found a way past him 6 & a half minutes after his 1st goal. The Penguins took some minor penalties in this period but instead of being on the defensive with a player less, the Penguins pushed forward and netted a short handed goal coming from Liam Houston, followed a minute later by a Lennon Deeney goal to see the Penguins finish 4 – 0 up at the end of the 1st.
Penguins did not let up the pressure and continued to rain shot after shot onto Cardoo who was playing out of his skates and done a great job at keeping Tornadoes in the game.  Lennon’s shot found a way past him after almost 5 minutes and this made the Tornadoes stage a fight back but Penguins net minder Caiden MacColl kept them at bay achieving a shut out before changing out to Calum Simmonds halfway through this period.  It was Flynn Massie who scored his 3rd goal with 8 & half seconds on the clock before Lennon Deeney netted home his 3rd goalgoals the game 4 minutes later.  Tornadoes fought back forcing Calum to pull out 3 back to back saves to have the Penguins end this period with a 7 goal lead.
The 3rd period saw no change in tactics for the Penguins and they came out hard again giving Tornadoes new Net minder no chance to settle in with a great goal from Liam in less than 2 minutes. With Penguins & Tornadoes finding themselves short handed, both teams battled hard, but again, it was the Penguins who had the upper hand scoring another 3 goals in little over 2 minutes before Tornadoes netted their 1st goal thanks to Torin MacLachlan. This started a flurry of shots on both nets with Aaron Stewart scoring a cracking goal in the bottom corner just out of the Net minders reach, followed up with a shot on goal from Liam before Flynn netted his 4th of the game with a lovely blue line goal whizzing past everyone.  Fair play to Tornadoes who never gave up and were rewarded for their efforts with the final goal of the match less than 3 minutes from time.
This was a game in which Penguins were able to bring along some of their 1st years to give them valuable game time and enable them to develop their individual and game play in preparation for next year!
With the defence staying firm and the forwards attacking throughout the team, it was an enjoyable game to watch.
Next time these 2 teams meet it will be in the Scottish Cup semi-final at Galleon Centre, Kilmarnock on Saturday 23rd March.
Final Score: North Ayrshire Penguins 13 –  2 Kilmarnock Tornadoes. Goals from 4x Flynn Massie, 4x Lennon Deeney, 2x Liam Houston, Aaron Stewart, Adam Bainbridge and Ewan O’Donnell, with assists from Aaron Stewart x3, Liam Houston x3, Matthew Evans x2, Conor Wood x2, Flynn Massie, Jacob Woods, Emma Miller & Rocco Murray.  Man of the Match: Adam Bainbridge 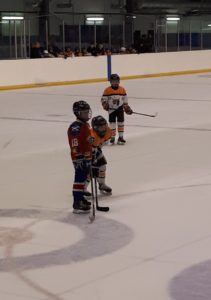 North Ayrshire Devils v Fife Falcons (Under 20’s).  Auchenharvie Leisure Centre, Stevenston.  Face Off: 7.30pm.
Final Score: North Ayrshire Devils 4 – 10 Fife Falcons.  Man of the Match: Sean Woods.
North Ayrshire WILD v Dundee Tigers (SNL)
Dundee Ice Arena.  Face Off: 8pm
Wild find themselves travelling to take on the Tigers at Dundee Ice Arena.
The game was not to be taken as a given as the Tigers have strengthened up their squad since our last meeting.  Into the first and it was end to end play with Wild producing some good hockey but got caught on a Tigers breakout which seen them go two down but Adam Kerr managed to slip one in to end the period 2-1.
Into the second period and Wild are all over Tigers like a rash but just can’t find the net, their goalie was dropping and letting rebounds go anywhere for the wild to pick up but Tigers strong defence line prevented rebounds hitting their target, this period ended 3-1 to Tigers.
The 3rd period saw the Wild up their pace with constant pressure on the Tigers goalie, but denied over and over again.
Overall this was a good game with a high level of skill from both teams but it wasn’t to be Wilds night.
Final Score: North Ayrshire WILD 1 – 3 Dundee Tigers.  Man of the Match: Scott Beverage – Net Minder.
News:
We would like to wish 2 of our Penguins good luck as they take part in the Power of 12 development training camp in Sheffield.
Flynn Massie & Liam Houston  (both 11yrs old) have been selected as 2 of the 10 boys from Scotland heading south to join 43 players from all over England with the aim of providing further development to raise their game to the next level.  We are very proud of their achievement in gaining this selection and know that they will do their best, take all they can from it while gaining the experience from training & playing with their peers, who they rarely have the opportunity to come in contact with and who will all be pushing each other to bring out their best.
Good Luck boys, go and do your best. 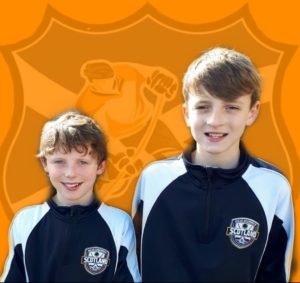