The night was a fitting tribute to Thomas, a friend and fellow hockey player.

The night had a different game format to what the Sabres kids were normally used to – line changes on the fly and penalty shots taken at the end of the game. We were slow to start, but by the final game we found our rhythm and were playing well. Kilmarnock ultimately won against Murrayfield in the final, coming down to a sudden death penalty shot out.

Great experience for the kids, who went home happy with their medals and goodie bags. Well done to Zack Docherty who was awarded Best Defender of the tournament.

With the first tournament under our belts, the Sabres now look to the next tournament at Ayr this coming Saturday. 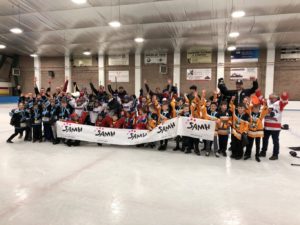