Home » Making the most of the extra leap year day!

Making the most of the extra leap year day!

On Saturday North Ayrshire Penguins travelled to Edinburgh to play Murrayfield in a league match. After defeating Murrayfield in the cup semi-final, Penguins knew this was going to be a tough game. Murrayfield let the penguins know they were out for revenge and opened the scoring in the second minute of the game. This woke the Penguins up and Rocco Murray was unlucky not to equalise with a great shot. Penguins eventually equalised through Max Stevenson just after the 6th minute. Lennon Deeney was unlucky with a 1st time shot before net minder Caiden MacColl kept the scores tied with a great save. Lennon and William Greenlees were unlucky with great shots with Lennon’s coming back off the bar. Just before the end of the 1st period some great skills saw Penguins eventually take the lead through Rocco. The period ended 2-1 Penguins.

The second period started with the Penguins on top and they increased their lead with a great goal from Max making it 3-1. Rocco, Lennon and Ben Roxburgh were unlucky not to increase the score with great shots saved by the Murrayfield goalie. The Penguins took a 3-1 lead into the 3rd period and Murrayfield came out fighting and after scoring twice tied the game at 3-3. Caiden made sure Penguins didn’t fall behind showing his class with a great save from a shot which looked destined for the top corner. With the clock running down both teams were looking for the winning goal and it came with only 29 seconds left on the clock through a fantastic shot from Lennon. 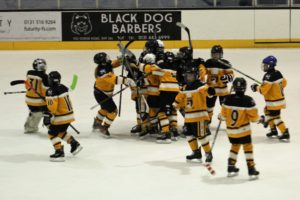 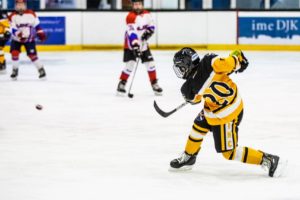 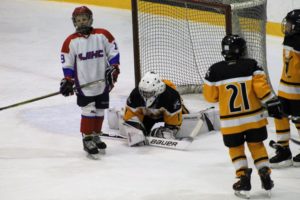 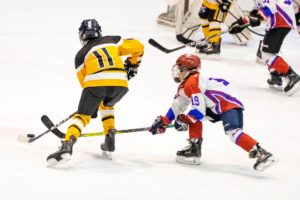 Missing some experienced players the young Sabres made the journey through to Fife to play a tough Kirkcaldy u10’s. With this being a first full ice game for some of the kids Sabres put on a great show of skill, determination and passion to make sure Fife Eagles didn’t have it all their own way. With some great chances through Lucas Allan, Lawson Kennedy and David Turner Sabres were unlucky not to score in the first 2 periods. With new net minder Brad Ruxton playing his first game in goal he made some fantastic saves to keep the score down. In the 3rd period Sabres eventually found a way past the Kirkcaldy goalie with David Turner beating the line change to the puck and firing it past the goalie and into the net. With all the kids having fun the game ended with a defeat for the Sabres. Report by David Turner.A big well done to all the kids and a well deserved Man of Match for Brad Ruxton.

Wild travelled through to Fife to take on the Kestrels hoping to get a result here that would help them in the playoffs. It was end to end stuff with both teams playing some good hockey, but it was our Ryan Parkin who received a pass from Scott Wright who slotted the first goal passed Kestrels Net minder Euan Simpson the period ended in a 0-1 result for the Wild. In the second period & it wasn’t long before Kestrels Allan Anderson received a pass from Scott Jamison to slit one passed our Scott Blackwell making the result all square. The Wilds’ Adam Kerr was playing forward position for this game and with a pass from behind the Fife goals to Chris Burwood saw him score our second of the night, this period ended 1-2 to the Wild. Into the 3rd period and could the Wild hold there nerve?  Both teams had there chances but the Wild made a mistake and it cost them a goal with the Fife #6 slotting the puck into the Wild net. Shortly after that, with Wild pushing forward, they got caught out, a delicate pass from Kestrels Scott Jamison to Jamie Wilson and onto Allan Anderson on a break away with only our net-minder to beat the Wild scrambled and tried to get back I support him but Allan slotted it home making the score 3-2 to Kestrels. The Wild tried and tried to pull this game back but Fife closed up shop and made it impossible for them to equalise. 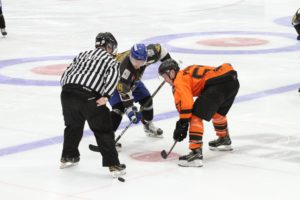 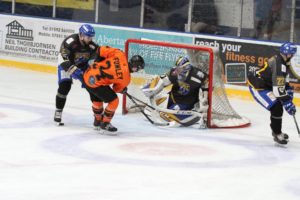 North Ayrshire Stars prepared themselves for what was sure to be a difficult game against Lanarkshire Lightning, who currently sit second in the league table with a couple of games in hand over first place Kirkcaldy.

The first shot on goal of the game came within the opening minute from Stars’, Flynn Massie, but following a save from the Lanarkshire net minder, the home sides’ net-minder, Calum Simmonds, was allowed little time to settle into the game, with a succession of penalties and a total of 11 shots on goal in the first period alone. The Stars did well to kill the penalties with strong defence and net minding, and held their opponents off until near the end of the first period when Lanarkshire took the first goal of the game, ending the first period at 1-0 to the away side.

The second period started with the Stars again on the penalty kill, which they managed well, but the away team were able to secure a second goal shortly after. The Stars had a couple of looks at goal but strong net minding from Lanarkshire denied them a spot on the scoreboard, with the second period ending at 2-0 to the away team.

The theme of the final period was end-to-end play, with Stars fighting hard for a comeback.  Lanarkshire kept the pressure on though, with a 3rd goal before Stars’ Flynn Massie and Lennon Deeney were both able to find the back of the net to bring the scoreline back to 3-2. Stars out-shot their opponents in the final period, and battled hard to the end. Lanarkshire were able to sneak a last second finisher on the final buzzer, ending the game at 4-2 to the away side.  Lanarkshire man of the match was #16, Robbie Thomson & Stars well deserved player of the match went to goaltender, Calum Simmonds.   Report by Lindsay McHugh 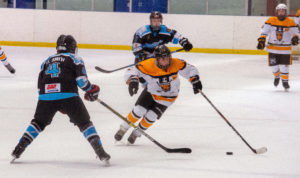 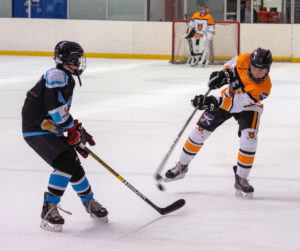 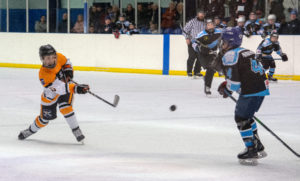 Meetings between these 2 teams always lead to an excellent display of skill, talent and determination and neither team disappointed on Saturday. From the very first puck drop the Predators took charge and within the 1st minute were on the scoreboard thanks to forward Dylan Murray. Play continued with both teams receiving penalties making it a defensive period with no more goals but some fine displays from Jack Neil & Aedan Orr.

The 2nd period started as the last had finished with tensions running high on both benches it was the Predators who made were making game play, a fine pass from Jamie Wilson to Kyle Forsyth was saved, but creating the opportunities lead to Dylan netting his 2nd of the game which was quickly followed up with another goal, this time from Josh Carslaw making it 3 – 0 to Predators at the end of the 2nd.

Lanarkshire came out fighting in the 3rd and our net minder Harry Campbell faced down a heavy attack on goal before one managed to fly past him making it 3 – 1. Predators then upped their game and took the play up the rink to Lanarkshire Net minder who was also in fine form and made our guys work hard.  It was Dylan who saw an opportunity during a power play to score his hat-trick goal of the evening. With both teams were fielding players from U14’s, who had just finished their game, there was no tired legs or lack of effort for anyone on the ice and the games experience they get playing with their peers is invaluable.  It was Captain Kyle Forsyth who scored the final goal of the game after a fine pass from Dylan.

Outstanding effort from the Predators who stuck to their game plan and played a great game with the desired result.  More of the same next week boys for your Scottish Cup semi-final v Belfast junior giants.  North Ayrshire Predators 5 – 1 Lanarkshire Lightning.  Man of the Match: Harry Campbell. 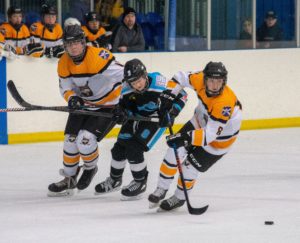 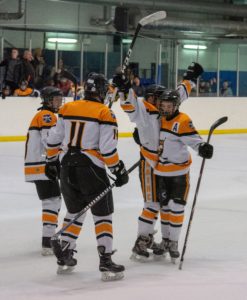 Sunday saw North Ayrshire Penguins travel to the east coast this time to Fife to play Kirkcaldy Redskins. After a hard fought win 24 hrs earlier there was no sign of tiredness with Penguins starting on the front foot & Lennon Deeney testing the Kirkcaldy goalie with a shot from the blue line which the was saved. Next to try his luck was Rocco Murray who also saw his shot blocked. Some great defensive work prevented Kirkcaldy from opening the scoring. William Greenlees was next to try his luck for Penguins but he also saw his shot saved. Penguins found themselves behind when Kirkcaldy found a way past net-minder Caiden MacColl making the score 1-0 Kirkcaldy. The Penguins rallied and their search for the equaliser was rewarded when Max Stevenson fired the puck past the Kirkcaldy goalie making the score 1-1. Rocco was unlucky not to send the Penguins into the break with a lead after his shot was saved by the catcher of the Kirkcaldy goalies. With the 1st period ending 1-1 Penguins started the 2nd brightly and Rocco again tested the goalie who again saved his shot. Penguins weren’t having things their own way with Kirkcaldy forcing Caiden into 2 great saves. Then more great defensive work prevented Kirkcaldy from taking the lead again. Penguins eventually got themselves in front when the Kirkcaldy goalie could do nothing to stop a Rocco shot flying past him and into the net to make it 2-1 Penguins. Lennon was unlucky not to increase Penguins lead when his shot came off the goalies mask. Oliver Turner was next to try his luck for Penguins with his shot going just wide. The score at the end of the 2nd remained 2-1 Penguins. The start of the 3rd saw Penguins trying to put the game beyond their opponents reach with Liam Durning and Ashton Lomas coming close with their shots. After a 5 on 3 penalty kill, Penguins eventually scored their 3rd goal with Rocco again firing a shot past the Kirkcaldy goalie making it 3-1 Penguins. With time running out Lennon was again unlucky when his shot was again saved. The match finished 3-1 in Penguins favour and ended a busy week for the Penguins with Lennon, Rocco and David Turner all playing 3 games in just over 24 hrs.  Man of Match: Rocco Murray. Goals from Max Stevenson & Rocco Murray x2. Report from David Turner. 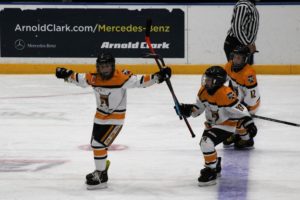