This week it’s the turn of our Penguins Coach Shannon Laing for Girl Make Your Move Campaign.

From Local Success to National Success.

Hi, my name is Shannon Laing, I am 22 years old and have been playing Ice and Ball Hockey for several years now. I started playing Ice Hockey when I was just 8 years old and, at that point, was the only female member in the club. As Ice Hockey is a very male dominated sport it was hard as a young female coming through the age groups. I was a competitive gymnast and used the ice hockey training as a fun hobby for several years.
Crunching point came, when I felt I’d reached my peak in gymnastics and was simply not enjoying it anymore. I decided to take Ice Hockey more seriously in 2010 and gave up gymnastics. I had always accepted that I wasn’t good enough to play in games and still gave my best in training and enjoyed the fun tournaments and friendly games at the end of the season. However, suddenly that wasn’t good enough for me and I wanted more. I began to work a lot harder, in and out of training and started playing for several teams including woman only teams to try and improve my skills and skating speed.
I played with the Scotland U18s, the Scottish Ladies and my junior club which was Kilmarnock at the time. I also started to play Ball Hockey in 2010. This was an opportunity for me to work on my fitness and stick handling skills without having to be on the ice, so I thought. Through varied opportunities, I was selected as a reserve in the GB U18s girls Ice Hockey Team and travelled to Switzerland with them. I was then asked to trial for the Great Britain Ball Hockey Team, I didn’t even realise Ball Hockey was a sport at this point. Needless to say, I was terrified.
I travelled with my mother to Sheffield, where I trialled for the GB Ball Hockey Team, and was shortly announced as part of the team that would be competing in World Championships in 2011, Bratislava, Slovakia. Since then I have completed in another 6 world championships both junior and senior and will be representing GB again this coming summer (June 2019) in Slovakia again, this time with seniors.
Since furthering my education, I have been given the opportunity to represent the Great Britain University team out in Finland this year in January 2019. Where we played against an incredibly strong side from China. I also signed in a women’s league this season with the Whitley Bay Squaws.
I have also started coaching over the past few years at North Ayrshire Ice Hockey Club, where I finished off my junior playing days. I coach the U12s at North Ayrshire Ice Hockey Club who are currently sitting top of the Scottish league table and have an impressive reputation throughout Scotland with other club coaches and referees. They are a credit to the North Ayrshire Club.
Over the years, I have experienced many down falls, come across many hurdles, being female, being a big one. But don’t let that stop you girls, get up and do exactly what makes you happy and exactly what makes you tick. No matter what sport it may be, because you will come across some of the best success stories and you will even create your own success stories and who knows maybe have the opportunity to encourage other young females to do the same. You could be someone’s idol or role model one day. “Bite the bullet” and do what makes you scared now and have the best time doing it. That’s what I did, and I have had some of the best experiences of my life through these combined sports and have also learned some of life’s toughest lessons, but it’s made me the person I am today girls. 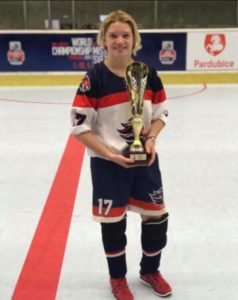