North Ayrshire Penguins welcomed Kilmarnock for their 1st league game of the season.  Looking to continue with the success of last season which saw the Penguins finish second place in the league, they were going to be coming out strong with their new look team right from the 1st puck drop and started in fine form racing into a 2 goal lead. Kilmarnock pulled a goal back before the Penguins regained their 2 goal advantage. Once again Kilmarnock scored and then again to level with the Penguins taking the 1st period to a 3-3 finish. The second period started in similar fashion to the 1st with Penguins regaining the lead. Kilmarnock weren’t for lying down pegging North Ayr Penguins back before going 5-4 in front. Rocco Murray then scored 3 fantastic solo goals to take the wind out of Kilmarnock this brought ‘we can do this’ feeling back to the Penguins who scored another 4 goal while only allowing Kilmarnock to gain 2 goals meaning the period on fire, with the Penguins racing into a 10-5 lead. The 3rd was to be more of the same for this new look penguin side who eventually run out 19-8 winners. A fantastic performance from all the kids, great start to the season and we are all looking forward to the rest of their season. 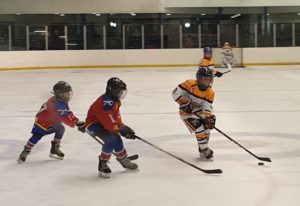 The Devils kicked off this season’s campaign with a home tie against local rivals Kilmarnock. This year’s team have a new captain in the form of Ryan Campbell who will be assisted by Christopher Burwood and Matthew Miller, Well Done guys, we are sure you will lead your team well. 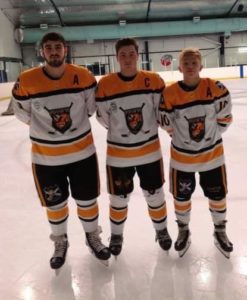 As the puck dropped the Devils went on the offensive, creating a string of early chances with their first goal timed at 2:20 by Christopher Burwood assisted by Jamie Miller from good power play work. Ryan Campbell added a second on the fifth minute assisted by Christopher Burwood. Kilmarnock managed to pull one back through a solo short-handed
goal from Mark Solerod. Ryan Campbell added his second of the night on 14:47 assisted by Jamie Miller and Haydn Woods. With a two goal lead the Devils looked to see out the period but Kilmarnock wouldn’t allow them to get their way pulling back two goals late on.  End of the first 3-3 Devils.
The second period would see North Ayr dominate scoring eight unanswered goals. With goals from Jamie Miller, Christopher Burwood, Ryan Campbell and returning player Jamie Sturrock. Other scorers was Kyle Forsyth and Connor Park who were both making their 20’s league debut. End of the second 11-3 Devils.
The Home team would again score early in the third through Matthew Miller assisted by Brandon Anderson. Jamie Miller would add to his tally taking him to 4 goals for the evening assisted by Haydn Woods. Kilmarnock would take advantage of their powerplay to pull one back through Lewis Grant and assisted by Rhyce Anderson before adding another through Sean Brown. Ryan Campbell scored his fourth late in the third period assisted by Haydn Woods who was accredited with 6 assists for the evening.
Final score Devils 14-5 Kilmarnock. Devils Man of the Match: Kyle Forsyth. Report by Paul Miller. 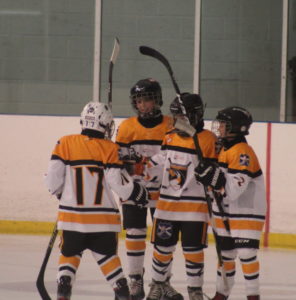