First Home Games of the Year.

North Ayrshire Stars made the short journey to Kilmarnock for their first game of 2022.
In what was always going to be a close game it was Stars that drew first blood with a great shot from the blue line by Rocco Murray. End to end play then followed and it was Killie that got the equaliser. Paul Corrigan was next to try his luck from the blue line but a great save denied him. Kilmarnock then took the lead after putting some pressure on the Stars goal. This would have dented most teams confidence but not the Stars who quickly equalised with a great shot from Lennon Deeney and the 1st period ended 2-2.
The second period started with the same fast paced action as the 1st but it was Stars that regained the lead after another great shot from Lennon. The Stars were unlucky not to increase their lead with Lennon being denied his hat trick by the bar. Second period ending 3-2 to the Stars.
The 3rd period was again, end to end and with Kilmarnock pushing again for the equaliser, Rocco broke away but was tripped by the Kilmarnock defender resulting in a penalty shot for the Stars. Up stepped Rocco but he was to be denied by a great save by the Kilmarnock goalie. Matthew Evans was next to try his luck for Stars but he was denied what looked like a clear goal. With Kilmarnock still pushing for the equaliser Stars goalie Caiden MacColl was at his best denying them with some excellent saves. Stars killed off some 5 on 4 plays with some excellent defending. With the sound of the final buzzer the Stars enjoyed a winning start to the new year.
North Ayrshire Stars won 3-2 with Lennon Deeney being awarded Man of the Match and goals from Lennon Deeney x 2 & Rocco Murray. 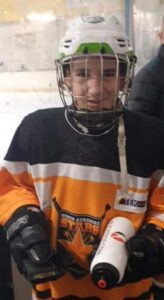 Following on from the success of the Stars,next to take to the ice at Kilmarnock were North Ayrshire Predators.  Games between these teams are always face paced and great to watch and this one was quick off the mark when team Captain Flynn Massie won the puck from the 1st drop, passed it to Lennon Deeney, who moved it up the ice before passing back to Flynn who found the back of the net with only 28 seconds on the clock. Kilmarnock didn’t wait long to reply and scored 2 minutes later.  This game was going to be one that would go from one net to another constantly, but it was the Predators who scored 1 minute later to put them ahead, again, Kilmarnock pushed back with their equaliser 2 minutes later.  This seemed to energise Kilmarnock who then attacked the Predators goal with an onslaught of shots, thankfully we had net minder Caiden MacColl & he was pulling out some incredible moves to keep the score level in his 2nd game of the day.  It was Predators Assistant Jacob Woods who made a breakaway only to be cut short but then win it back and score 5 minutes later putting them back in front with the period finishing 3-2 to Predators.
The 2nd period started quicked with the 1st goal coming from the Predators after only 10 seconds making this a hat-trick goal for Flynn.  A minute later Predators received a penalty for tripping, with North Ayr now short a player, Kilmarnock took full advantage and pulled back a goal. Predators seemed a little rattled and this continued when Kilmarnock scored again to level the game. It was then the turn of Kilmarnock to receive a penalty for slashing, but Predators just couldn’t take advantage and make it count, although there were breakaways, good team play and pucks hitting off the pipes, even the famous blue line slapshot from Kerr Drummond was denied.  Period ended 4-4
It took 2.37 minutes into the 3rd period before there was a goal, thankfully it was for the Predators when Flynn found a way through the Kilmarnock players & their net minder.  Kilmarnock went on to equalise again.  Predators were not happy and pushed forward, with Emma Lamberton working hard to keep possession with skilled passing and pure determination to rush the net but again being denied, they never gave up, always looking for the pass that would give them the goal and were rewarded 4 minutes before the end with a goal from Lennon Deeney to clinch the game.
Even when North Ayr’s play wasn’t as smooth & flowing as it should be, the fight & want to get the game over the line is a credit to the team. They kept plugging away when Kilmarnock kept pushing for a leveller but their resilience & team character got the job done, every player helped this happen, from the strong defence who protected the net and even had a few shots saved ,to the forwards from each line who won the puck, moved it over the ice and were unlucky not to score on occasions, to our net minder who had a 58 shots on target and saved 53 of them.

Sunday saw our North Ayrshire Devils U19s welcome Dundee Stars JIHC to Stevenston for their first game of the year.

Sadly it wasn’t to be and the visitors won 8-2, Man of the Match: Jacob Woods with goals from Anthony Curlett & Luca DeSimone.  Many thanks to Dominic Jaglar and Ben Keddie who covered our goals while our regular net minder recovers from injury. 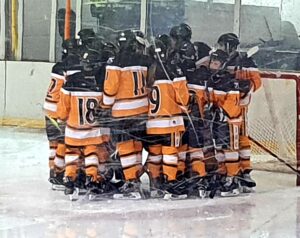