The WILD clock up another win this weekend against Kilmarnock Thunder, in what was one of their best displays of teamwork.  Scott Blackwell one of the WILD keepers actually played outfield this game and eventually, with the assistance of the team, got him his first goal (not bad for a goalie).

The 3 periods were controlled by the WILD throughout but Thunder had a few good goals too and played some good team hockey.

The score ended, on what was an entertaining game, 24-3 to the WILD.

Next week finds the WILD at home against the Dundee Comets, so we will see if they can clock up another win.

The League Leaders where on the road again this weekend with a trip to the home of the Sharks. Devils were out to continue their winning start to the season with a tough opponent waiting for them.

Solway’s quality showed as they took the lead after only 25 seconds. They then doubled their lead before the Devils struck midway through Haydn Woods assisted by Ryan Campbell goal time 10:03. End of the first 2-1 Sharks.

The Sharks would extend their lead early in the third. However, the Devils showed the free scoring play that has them at the top of the league. First through Matthew Miller assisted by Brandon Anderson, then straight from the face off, lead scorer Jamie Miller put the Devils in front assisted by Haydn Woods and Ryan Campbell.

The Devils would add 2 more unanswered goals from Ryan Campbell and Sean Woods. Winning the tie 7-5.  Man of the Match went to Darren Easton with a superb performance in Defence.

The Devils have the next few weekends free with their next game at home to local rivals Ayr Bruins Sat 23/11/19 Auchenharvie Leisure Centre with face off 7:30pm.

Scotland National Team Trials.  North Ayrshire Ice Hockey Club have 16 players attending trials hopeful of winning a place in the Scotland Squad.  Good Luck to each and every one of them.

We also have our 3 female players heading to The Timecapsule in Coatbridge for Scotland Girls Development Training. Keep up the hard work girls! 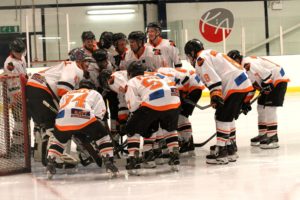