North Ayrshire Devils travelled to Kilmarnock for a friendly until restrictions are lifted to allow the full team back on the ice.
As with last week’s games, this proved to be an exciting match which had the play going to every area of the rink as the players desperately tried to be the ones who made the breakthrough but it was to the credit of both net minders that the period finished 0-0. Second period looked like an entirely different game with our Devils dominating it thanks to some extra fast skating and skills which made it look all too easy, Devils finished 4 – 1 ahead. The third period was the nail-biter with Kilmarnock coming out strong and scoring 3 unanswered goals in 10 minutes to level the scoring to 4-4, play got faster as players got hungrier for the win but it was the Devils who then scored 3 goals before Kilmarnock responded with another 2 goals. North Ayrshire called a time out to regroup and talk tactics with only minutes left on the clock, the game could have gone either way.  Thankfully it was to be our night with a fine shot from Anthony Curlett to put it out of reach for Kilmarnock and as the final buzzer went, the game finished 8-6 for our Devils with Man of the Match going to No 18 Dylan Murray for some skillful plays  and scoring 4 goals.

North Ayrshire Stars welcomed Lanarkshire Lightning U14s to harvies ice rink, Stevenston for their 1st home game of 2022 hoping to follow up a convincing win in the previous meeting between the sides. It didn’t take long for the Stars to take the lead with a well taken goal from Lennon Deeney. Stars net minder Caiden MacColl made some good saves to keep his side in the lead. Lanarkshire finally found a way past Caiden to level the score at 1-1. Stars regained the lead thanks to Eithan Conlan and then extended their lead through Ashton Lomas to go in at the end of the 1st period with a 3-1 lead. Lanarkshire came out quickest and pulled a goal back early in the second making the score 3-2. Lennon then restored the Stars 2 goal lead with a well taken goal to make it 4-2. Lanarkshire reduced the deficit back to 1 goal making the score 4-3 with a powerplay goal. Lennon scored his third and the Stars 5th of the game with a shorthanded goal before Rocco Murray got in on the scoring making the score 6-3 to the Stars at the end of the 2nd period. Some great defending saw Stars kill of a 5 on 3 penalty kill without conceding a goal. Lanarkshire eventually brought the score back to 6-4 before the final buzzer went which saw the Stars get a well deserved 6-4 victory to continue their impressive run in the league. Man of the match for Stars was No 9 Paul Corrigan. 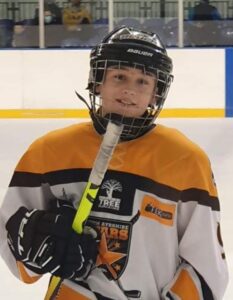 North Ayrshire Predators were up next, also against Lanarkshire Lightning, this time the U16s.  The Predators were looking to improve on the defeat they got at the hands of Lanarkshire earlier in the season but it didn’t get off to a good start when the away team scored after only 2.5 minutes, the Predators didn’t have time to find their feet before Lightning scored again, but rather than dishearten them, Predators pushed and were rewarded with a breakaway goal from Flynn Massie, this brought Predators back into the game, but two quick goals from Lanarkshire dampened the mood for them.  Second period started with another Lanarkshire goal, but thanks to some sharp defending from Kerr Drummond, Conor Wood, Rocco Murray, Paul Corrigan, Jack Malcolm & net minder Caiden MacColl, that was their last goal that period and play flowed from end to end with some smart moves, passes through the team on all likes until Massie broke away and netted his 2nd goal meaning the period ended 5 – 2 to our visitors.  The 3rd period saw both sides step it up as they both went in hard looking for the goals. Lanarkshire were rewarded with the only goal this period and won the game 6 – 2, although a loss, this was a much improved score on their last meeting and this young team starting to find their flow again.  Predators Man of the Match:  Flynn Massie. 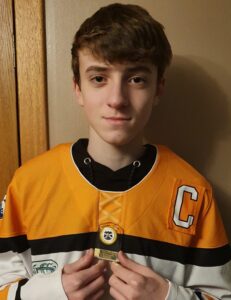 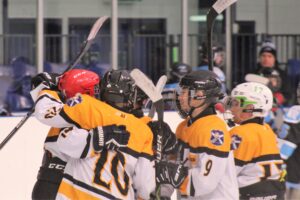