Boat trip weekend for 3 of North Ayrshire’s teams as they descended upon Belfast and the SSE arena for their away games against Belfast Junior Giants.

In this 1st meeting between the 2 teams this season, it was the Stars who came out wanting it more netting their 1st goal after only 3 minutes with a nice clean pass from Aaron Stewart which allowed Adam Bainbridge to slot it passed their keeper with ease.  This seemed to give Belfast a shake as the play, then moved up the ice making a bee-line for the goal but were stopped by our Net minder Calum Simmonds again and again before D-man Kerr Drummond swung a powerful slapshot to get the 2nd goal for the Stars, Belfast were unable to make a breakthrough and the period finished 0 – 2 to our Stars.

2nd period started with the Stars taking a string of silly penalties which saw the team down to 3 players on ice, but the penalty kill line really worked their skates off , but it looked like legs were tiring on this line and Belfast scored but this was disallowed due to High Sticking.  The Stars dug deep and with when finally back to full strength it only took 30 seconds for Liam Houston to find the back of the net assisted by Rhys Deeley. This in turn was answered with a goal from Belfast 3 minutes later but the Stars cancelled this out 2 minutes later when d-man Conor Wood moved the puck up the ice to find Flynn Massie waiting to receive his pass to bring the score at the end of the 2nd to 1 – 4 to Stars!

With the start of the 3rd brought a change in goal keeper for the Stars, bringing in new keeper Connie MacDonald for her 1st taste of league action at 14’s.  She got off to a flying start with a great close range save and then a rebound save seconds later and she kept them at bay until just over 3 mins in a sneaky puck whizzed right passed her.  Emma Lamberton made a breakaway but was shut down just before the blue line. Despite the teams best efforts Belfast’s Ellie Patrick again found a way through to score her 2nd of the game.  Stars decided to bring Calum Simmonds back between the pipes, unfortunately Belfast were on a roll and managed to slot one past Calum before he knew what was happening, but that was where he stopped their goal fest and this spurred on the Stars who began raining shots on the Belfast keeper, Flynn, Rhys, Kerr, Liam, Emma all firing shots but despite the great passing and structured team work these were all denied. It was Flynn Massie who got the breakthrough goal to net his 2nd goal of the game minutes later, bringing them to 4 – 5 but not happy to leave it at that, Adam Bainbridge slotted his 2nd of the match after a textbook pass from Liam Houston to make his goal look all too easy.

Next up were our Predators (U16’s)

Belfast got off to a fast start and after only 23 seconds Belfast opened the scoring. North Ayr got a power play early in the 1st period but they just couldn’t take advantage of their extra man.

Belfast then got a power play of their own, going 5 on 3 and they made North Ayr pay to make the score 2 nil Giants. Late in this period North Ayr had some good play but a resilient Belfast defence & good goalkeeping kept their goal intact, ending the period 2 nil to Belfast.
The 2nd period started the same way as the 1st with Belfast coming out of the blocks quickly & after 1 minute 3 seconds, they made it 3 nil.  Belfast kept up the good work and soon scored their 4th goal in the 20th minute with another 2 minutes later they made it 5 nil. Net minder Harry Campbell made a good save but the Belfast forward popped in the rebound. Harry made several further good saves but got injured half way through the period taking a strong shot to his head. After a short break Harry continued between the pipes continuing his good work. North Ayr had a breakaway chance but Dylan Murray was judged off side. Antony Curlett was next up with a quick fire shot but it missed the target. With 3 minutes 30 left in the period Belfast made it 6 nil & 90 seconds after that they got their 7th. End of the 2nd period 7 nil Belfast.
North Ayr started the 3rd period on a power play after the Belfast captain was thrown out the game for a check to the head. This didn’t seem to deter Belfast as they scored 2 short handed goals within a minute of each other making it 9 nil. A change of net minder for North Ayr saw 14’s Stars goalie Calum Simmonds entering the fray. With 32 mins played, North Ayr pulled 1 back with Antony Curlett scoring with a slap shot from the top of the circle. 2 minutes later Kyle Forsyth scored from close in, picking up a rebound in front of the net. Both teams created several opportunities but both goalies stood firm.  Reported by; Colin Massie. 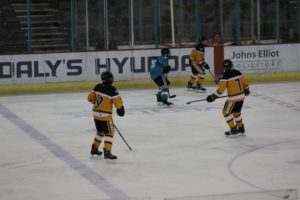 Finally to complete our trio of games were our Penguins (U12’s).

This weekend saw the Penguins have an early rise to travel across the Irish sea to take on the Belfast Junior Giants. Penguins started brightest and opened the scoring early on with a short handed goal from Max which was followed by a spectacular blue-line goal from Lennon. Belfast proved the Penguins wouldn’t have it all their own way by scoring 2 goals of their own. Penguins finished the period the stronger team and Jack made sure they went into the break with a 3-2 lead after scoring his 1st league goal for the club. The start of the second period saw Belfast come shooting out of the blocks and it wasn’t long before they took the lead for the 1st time in the game with another 2 goals. Penguins weren’t going to give up and equalised with a second goal of the game from Jack to end the period all square at 4-4. Before you knew it, Penguins took the lead again through Lennon with another shot from the blue-line but Belfast equalised again with a well worked goal to tie the game at 5-5. Penguins regained the lead through a solo goal from Max and then increased their lead with a fantastic breakaway goal from Rocco. Belfast threw everything they had into the final stages of the game but found Penguins netminder Caiden MacColl was letting no more pass him.  The match ended with a fantastic result for Penguins winning 7-5. A great team effort from all the kids and a great debut for Lucas and Jack. A well deserved Man of the Match for Penguins Caiden MacColl. Reported by; David Turner.

This weekend’s game brought Murrayfield Racers through to the WILD’s first home game of the season, with the wild carrying a couple of injured players meant that lines had to be swapped around.

Start of the first period saw WILD come off the bench strong, but couldn’t get many shots on their goalie, Racers replied by scoring their first goal with 3.28 on the clock and the second from what looked like a copycat play with 5.15 on the clock.  WILD began to struggle with the experience of the racers, but with Scott Beverage pulling off save after save, it kept them from an embarrassing score line. Racers continued scoring goal and the period ended 0-4.

2nd period was much the same as the first but the WILD started to put some good plays together and created shots on goal, but it wasn’t to be as the Racers stayed composed and put another 4 goals on the board period ends 8 -0

Into the 3rd period of what has turned out to be a difficult night for the WILD, but whatever the pep talk in changing room was – it worked, the WILD stepped up and produced some lovely link up plays and young Ryan Campbell showed the older players how it’s done by firing 3 goals passed the Racers goalie in 6 mins, the players soon tired and fitness stepped in with the Racers looking more comfortable, they racked up another 3 goals making the score 11-3  but in hockey terms the period was held to 3-3. Reported by; David Kerr.