Home » A great win for the Penguins

A great win for the Penguins

North Ayrshire Penguins made the short journey to Ayr for this weekends game. Both teams started the match well and the action moved from end to end. The Penguins eventually broke the deadlock just before the 5th minute of the 1st period with a well worked goal finished off by Lennon Deeney. This encouraged the Penguins who quickly increased their lead with 2 quick goals, 1st from Max Stevenson then a second from Lennon to make the score 3-0. Penguins kept the pressure on Ayr Bruins goal and got their reward when Max sent a shot crashing off the Bruins post and with Oliver Turner at the back post to put the loose puck into the net, this sent Penguins into the interval with a 4-0 lead.

The second period started with North Ayr Penguins on the attack, keen to increase their score & Lennon was unlucky not to add to his tally with his shot hitting the bar.  It wasn’t long though before Penguins got the goal and increased their lead with Jack Malcolm making the score 5-0. Penguins weren’t giving up and continued to play great hockey as a team and would have been further in the lead if it wasn’t for some fantastic saves from the Ayr Bruins goalie who certainly was on fire. Penguins patience paid off with goals from Ben Roxburgh, Rocco Murray & a second from Max, making the score at the end of the second period 8-0 to the Penguins.

The 3rd period was to start the same way the second ended, the Penguins came out hard and fast with Rocco scoring twice in the opening minutes.  Lennon finished the scoring for the Penguins with his 3rd goal of the game making the final score 11-0 to North Ayr Penguins. Thanks to Ayr Bruins for not giving up and pushing our team in each and every period.

A fantastic team performance from all the kids with goals coming from all lines and various players; Hat-tricks from Lennon Deeney & Rocco Murray, 2xMax Stevenson with 1 goal each from Ben Roxburgh, Jack Malcom & Oliver Turner.

Man of the Match went to Ashton Lomas.

North Ayrshire Sabres also made the short trip to ayr with a young group of players looking to put their training into action and gain much needed game experience.

The Sabres started the game brightly and raced into a 3 goal lead with an impressive hat-trick coming from Ashton Lomas who had just finished playing up with the Penguins in the previous game. But Ayr Bruins where not giving in and answered back with an explosive display of play, racing into a 9-3 lead at the end of the 1st. This shook the Sabres a little and they struggled to return to form.

The second was to be more of the same with Ayr Bruins playing siege on the Sabres goal with Jake Reilly making some fantastic saves to keep the score down to 14-3 at the end of the second.

3rd period saw the Sabres fight back and although Ayr Bruins didn’t let up their attack, Sabres managed to keep them restricted to only scoring 4 goals this period.  Some of the team had played the previous game for the Penguins so tired lets had set in but it a learning game and there were definitely positives to be taken away from the match. The final score 18-3 to Ayr Bruins.

A big well done to both teams for their effort, determination and good sportsmanship, but especially to our Harrison Provan and Bailey Toner who played their 1st game for u10s.

Man of the Match was our Net Minder Jake Reilly. 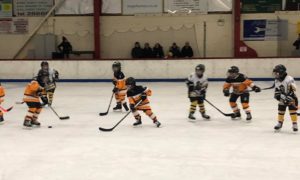 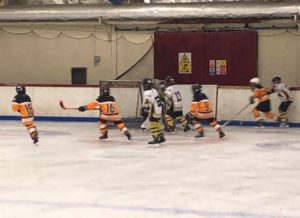 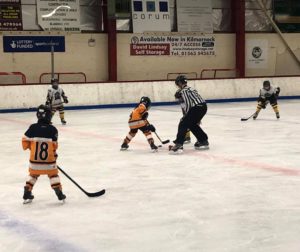 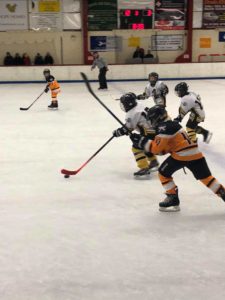 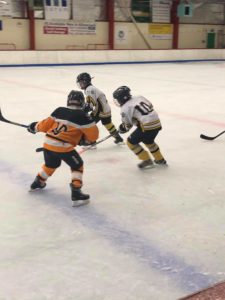 Not the best of nights for the Wild, losing 1 – 6 to Dundee Comets.