Saturday 23rd November
North Ayrshire Predators v Kilmarnock JIHC @ Galleon Leisure Centre. Face Off: 5.30pm
Always a hotly contested game, and always seeming to be scheduled early in the season, your Predators arrived at the Galleon fired up for the game against their local rivals.
Biggest surprise of the game is that there were only 10 mins in penalties awarded, as both teams put playing disciplined controlled hockey first.
It started badly for the Predators with the officials awarding a goal to Kilmarnock despite the puck being under the glove of the Predators net–minder in front of the goal line.
It didn‘t take long for the response, Kyle Forsyth netting the equaliser on a feed from Dylan Murray.
The game flowed from end to end, Kilmarnock scored next, then the equaliser, this time Dylan Murray scoring, assisted by Kyle Forsyth.
2nd period saw the Predators jump out to an early lead, with goals from Antony Curlett and Kyle Macintosh, before Kilmarnock scored another to reduce the lead to 1 again.
Next goal from Kilmarnock saw the officials ignore the rule book and award a goal that was scored after a puck had been shot at the net–minders helmet, even the home team were surprised to be awarded this “goal”.
3rd period saw Kyle Forsyth and Dylan Murray combine again to take the Predators into a 2 goal lead, before an unstoppable shot from Innes Gallagher brought the home team to within 1 again.  A defensive lapse in our own zone on the PP saw the Predators cough up the puck to Charlie Christie, who made no mistake in burying the final equaliser with a fine finish.  Fiercely competitive game, played in the correct spirit by both teams, in spite of questionable officiating!
Final Score: North Ayrshire Predators 6 – 6 Kilmarnock U16’s. Man of the Match: Dylan Murray.
North Ayrshire Penguins v Ayr Bruins U10’s @ Auchenharvie Leisure Centre,  Stevenston. Face Off: 6pm.
Penguins were looking to continue their undefeated start to the season against Ayr Bruins.
1st period started well with chances at both ends before Penguins took the lead with a goal from Rocco Murray. Rocco then made it 2-0 with a well worked goal shooting it high into the net ensuring Penguins ended the period on top.
The second started with North Ayr increasing their lead through a goal from  Lennon Deeney.   Penguins weren’t for letting up and laid siege on the Ayr Bruins goal with Rocco coming close with a shot that struck the bar. But his continued persistence paid off as he increased the Penguins lead with his hat trick goal to make the score 4-0.
Penguins kept the pressure on the Bruins net with some good team work and eventually increased their lead with a goal from Jack Malcolm. Penguins kept the pace up and nearly increased their lead with some great skills from Liam Durning but he found a Bruins goalie on top form, making a great save to deny him. The second period ended 5-0.
The 3rd period saw Penguins increase their lead through Captain Rocco Murray making the score 6-0. Rocco wasn’t for letting up with the  goals and soon made it 7-0 before Jack Malcolm made the final score 8-0. This was a great team performance making it 4 wins from 4 for the Penguins. Man of the Match: went to solid defence man David Turner. (Photo Credit: Fiona McBride) 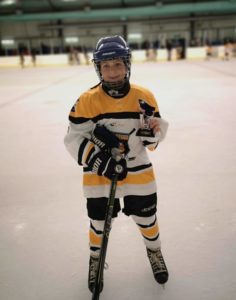 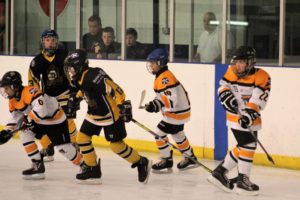 North Ayrshire Devils v Ayr Bruins @ Auchenharvie Leisure Centre Face Off: 7:30pm
Devils look to Make it 4
League Leaders North Ayrshire Devils were in action again this weekend with a home tie against local rivals Ayr Bruins.
Devils were out to continue their winning start to the season, and it wasn’t long till their quality in attack brought the first goal. Ryan Tunnicliffe opened the scoring assisted by Christopher Burwood and Lucas Correia. With Angus Gaffney adding a second almost immediately. This set the tone for the first period as the Devils stormed into a 9-goal lead at the end of the first period.
The Second period saw the Devils ease up in their urgency only converting 3 goals from the numerous chances some in part due to some outstanding net minding by the Bruins. With the second period finishing 12-0 to the Devils, it would take a big third period for the Bruins to close the gap.
The start of the third period would see the return of former Devils netminder Brandon Rooney take his place again between the pipes. From the drop of the first puck in the third period the Devils had regained their momentum from the first period scoring 7 unanswered goals.
Final score 19-0 Devils making it 4 wins in a row. Devils Man Of the Match: Lucas Correia.
The Devils next game is at home to Belfast Junior Giants on Sat 30/11/19 Auchenharvie Leisure centre face off 7:30pm. 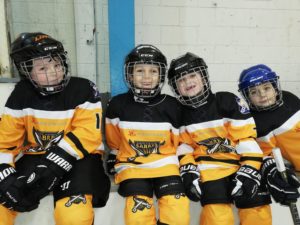 Sunday 24th November
North Ayrshire Sabres hosted a x-ice tournament at Galleon Leisure Centre,  Kilmarnock.
North Ayr Sabres & Learn to play welcomed teams from Dundee, Lanarkshire, Kirkcaldy and Ayr Bruins for their 1st x-ice of the season.
There was some great skill on show from all the kids. Everyone had fun and we look forward to more games this season.
These small ice games give the children the chance to put all they are learning into practice and gives then a sense of game play scenarios and encourages then to make split-second decisions on the go!
Man of the Match: Ruaridh White 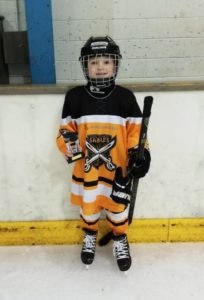 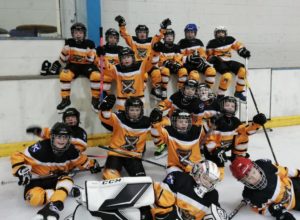